TBC2 has been released!

I’m pretty sure I am not imagining this, my email is trying to tell me my TBC2 has been posted to me

Great start to the year!! Thanks LZX crew!!

How are you guys looking forward to using yours?? I’ll be connecting two Visual Cortex’ both with live feeds which I’ve been waiting to do for some time!

Great news! Kudos to the LZX team! An awesome milestone has been reached.

I’m just starting down the analog video path, the TBC2 will be sending a couple of streams into a FGK3 keyer and SMX3 mixer. The fun will soon begin!

we have spent some time getting our rack put back together with a couple upgrades since it was used last time. in the rack will be mostly input stages. At some point I may put all the eurorails into the rack (it is a tower) but for now I’m going to try having them live separately.

4x4 HDMI matrix
two outputs are HDMI > component boxes (1 basic amazon, 2 kramer vp422)
one out for a monitor with passthrough
one out hyper deck 2 for recording

so I’ve got switchable inputs for both channels of TBC2. The secondary run with the kramer 719 also has a feedback channel from a RGBHV distributor.

there is a lot more to the setup but it isn’t finalize yet so I won’t go into too much detail.

I’ve been dreaming of TBC2 inputs front ended by individual switchers for a long time it is crazy that it won’t be that much longer now.

one of the biggest steps up I’m super pumped about is a sample based workflow I’ve been cooking up.

I’m using two hyper deck shuttle 2s one for record and one for playback. once TBC2 lands I’ll be able to record the output and then swap SSDs so that I can play that recording back and record its output over and over and over…!

Of course I’m also interested to finally be able to send in and out of touchdesigner and incorporate some of the software tools I’ve made in the last year or so.

I’ve been really thinking about my in/out flow and how much I need vs how much is redundant because of so many different boxes. This basic setup has worked before beautifully but I can’t help but think I can condense and gain features. I’ve been looking at those black magic constellation switchers. Even the basic one with 10 inputs and 6 assignable outputs sounds pretty rad for a video system. However with the next step up to the me/2 you get 20 ins and 12 assignable outs plus a full 2nd switcher essentially. The me series will lets you switch between switcher instances all the inputs are shared but you can have separate program/preview and run the two into each other in a bunch of different ways or just side by side. My biggest concern currently is that I would have to have all of my source be at least 720p & SDI to go into these switchers it looks like. The mid range also has something called super source which would be a lot of fun to use in a video synth workflow. You can have 4 inputs on the screen at once all with individual DVE control for pan/x/y/zoom/crop things.
https://www.blackmagicdesign.com/products/atemconstellationhd

Of course I’m also interested to finally be able to send in and out of touchdesigner and incorporate some of the software tools I’ve made in the last year or so.

I’m interested in hearing about what you are doing with your software tools. I don’t want to hijack the thread.

If you’d like to start a new thread I’d be happy to discuss what you’re doing and what I’ve been up to as well. Maybe others will join in as well.

Got mine around lunchtime yesterday. It works great, but I don’t yet have a module that can output hd (a Syntonie kit is otw, so that’ll be solved soon.) I really love the ramp generator feature, that’s going to prove extremely useful. I haven’t tried messing with an sd card yet to take that functionality for a spin, but that’ll probably happen tonight.

yo can someone with a tbc2 in hand,

this configuration certainly isn’t doing tbc2 character and fidelity any justice? perhaps via visual cortex even. 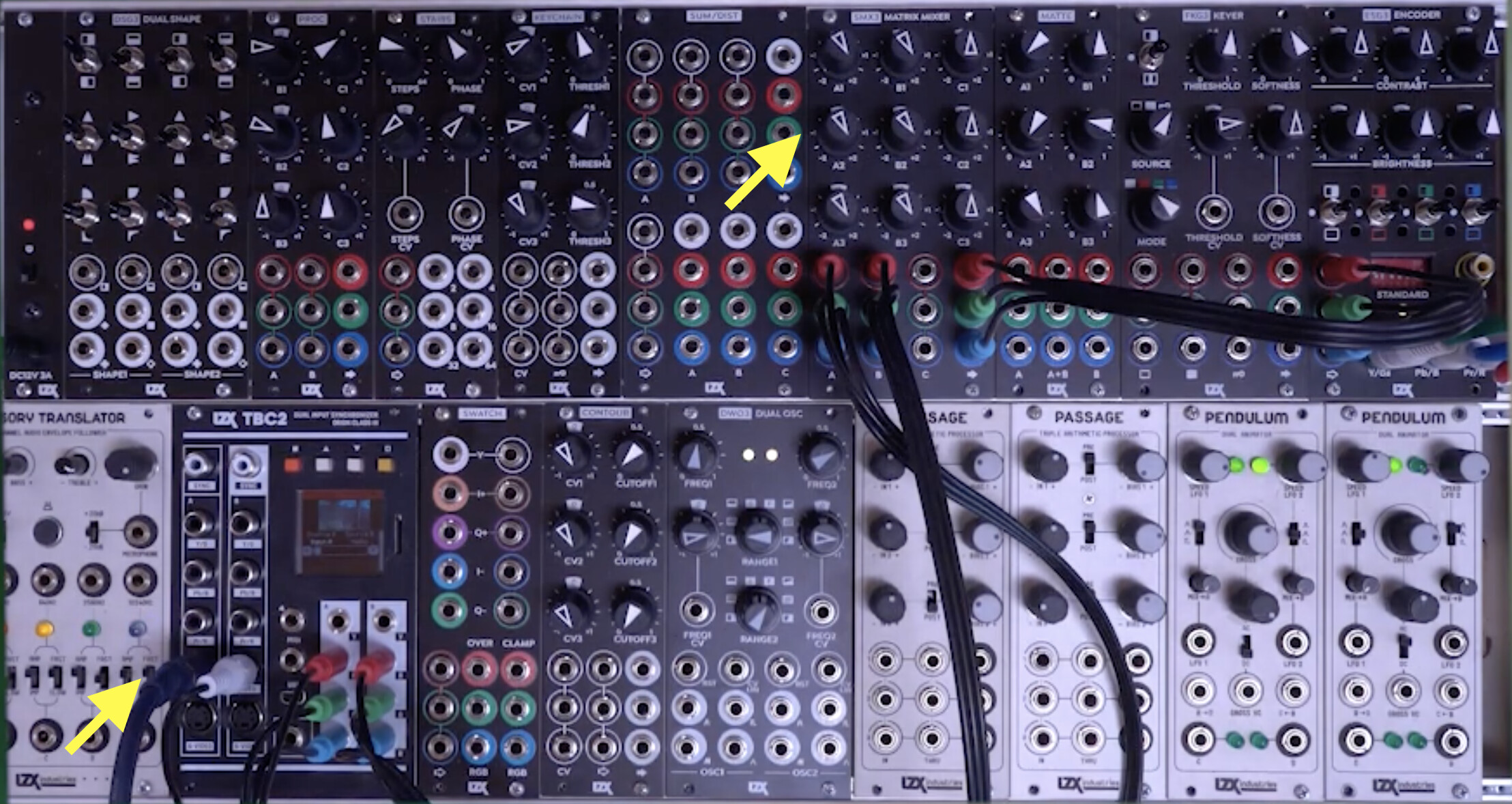 This is awesome! Well done, Lars, and good job to everyone at LZX. I just watched the video and TBC2 is everything I’d hoped for. Now I’m even more excited for what Chromagnon will bring, I’m sure we won’t be disappointed. Our patience has been worth the wait and has been rewarded.

this configuration certainly isn’t doing tbc2 character and fidelity any justice? perhaps via visual cortex even.

Does gain look too hot or is it something else you’re seeing? The knobs on SMX3 should be about halfway up if you’re wanting unity gain passthru. Has ESG3 been calibrated using the ramp based instructions here?

Here is a quick process to trim your ESG3 module if desired. If your module’s color balance looks good to you, don’t mess with it! The purpose of the trimmers is to adjust the input range so that a 0V to 1V input scale matches the scale of the black/white level clipping on ESG3’s outputs. Patch a Ramp source into the Red input jack. Leave it there – the Red input is normalized to the Green and Blue jacks too, if they are left unpatched. Set all six control knobs to 50% Center positions. Mon…

If not gain related, let me know what you’re seeing!

it’s possible that this video is showing me the future but i can’t help but think that Composite > SMX, Gain x2 > ESG is a stomped on demo–meaning, it can only get better from here?

HD downscaled to SD looks just great to me. That’s how I’ve been feeding HD into my VC - I downscale it first. Obviously there’s some loss, but how much that matters will depend on how you process the video. Even an ‘identity’ process - no processing at all - looks good to me.

So I expect TBC2 up/downscaling will look equally good.

I’ve watched the YouTube video a couple of times and it’s starting to sink in just how powerful the TBC2 is. I have a question about the part where Johnny is showing the feedback. He switched to NTSC because he said he didn’t have something to handle the component for both feedback and output. What device would be needed to handle component feedback? Some kind of splitter? buffer? amp? Thanks! 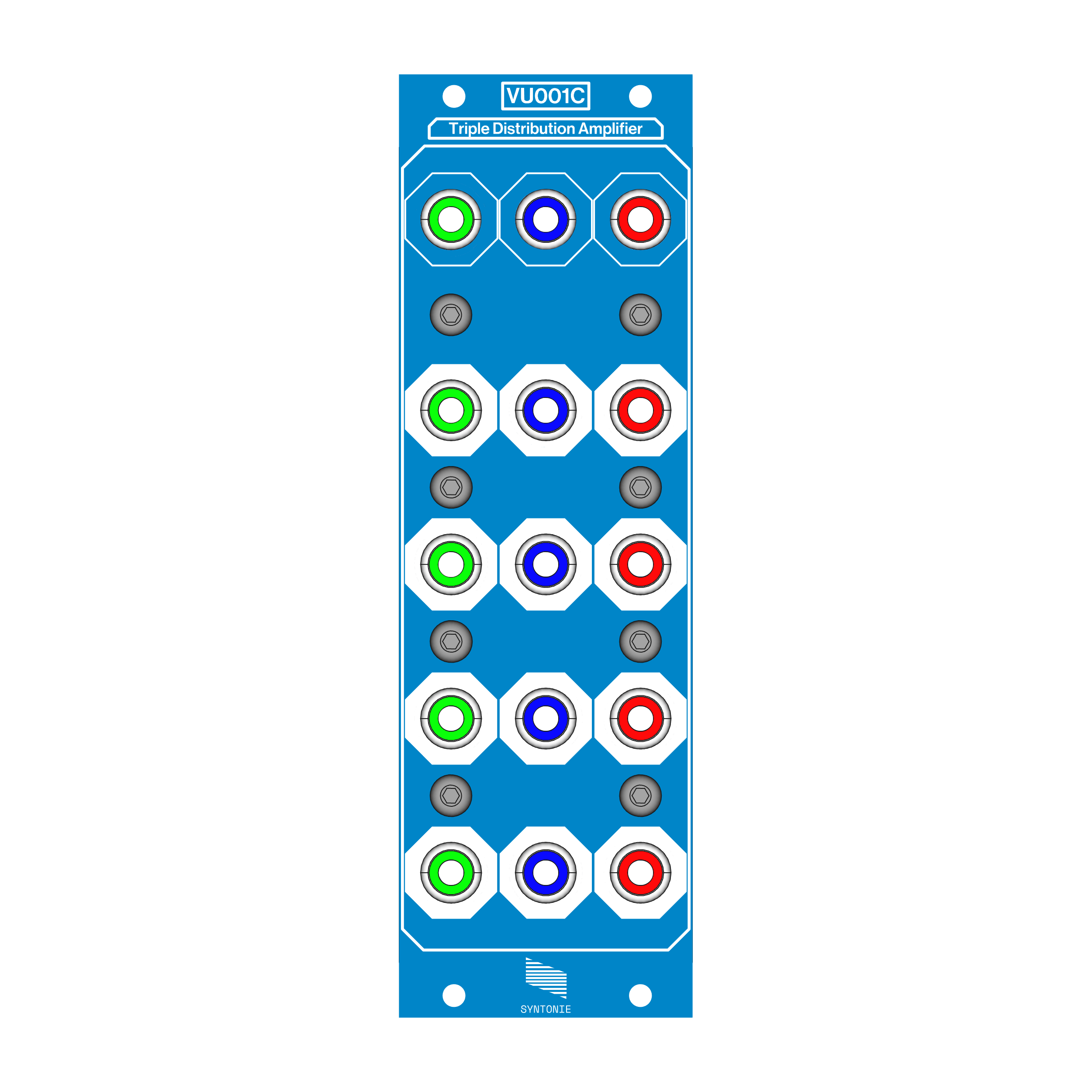 Does the TBC2 have a screensaver mode after inactivity i.e. 10-15min? Just curious, I noticed screen burn-in on my MP and wasn’t sure if TBC2 will have the same issues.

I’ve added this feature this afternoon, and it will be in the 1.0.1 software release. After 10 minutes of no keypad activity, the screen turns off. Pressing any button turns it back on.

So awesome! Thanks Lars!!!

this is awesome. i have been meaning to ask the same for the mem palace. My screen is totally burned in and was even curious about how easy it would be to replace the mem palace screen?

Hey this looks cool. Sorry I deleted my other post, it was an accident.

Any HD/component video distribution amplifier will work, I have some Extron DAs. They don’t take up valuable Eurorack HP space.

I too would like to know this (?easy to replace memory palace screen due to burnin?).