Hey all, I am wondering if there is a DIY way to get a composite video signal into RGB for processing external video in the memory palace.

I recently pre-ordered the MP because it looks freaking amazing. I know there are some other LZX products that would let me bring an external video source into the MP, but unfortunately as much as I would love to give all of my cash to these folks I cannot afford another large purchase at the moment. I am slowly working my way through the Cadet series to try to build a system up from that and am looking for a way to integrate that + external video + MP. I’m still pretty new to all of this and don’t completely understand video signals and all that, but I’m pretty handy with a soldering iron and willing to take the time to learn. Any help appreciated!

As far as I’ve found, there’s no good DIY way unless you’re a lot better with electronics than I am (which admittedly isn’t too great a feat… I loosely understand how the Cadet modules work, though I could not have designed one myself from scratch).

The way color is encoded in the composite signal is by encoding the chroma (color) information at a specific frequency and then mixing that into the luma (brightness) signal. So you’ll need to filter out the chroma, which shouldn’t be too hard (if you know how to design a specific filter), but in order for the chroma to be correct it needs to sync to the colorburst. So I believe you’ll need a PLL to sync to the colorburst, but I’m not entirely sure where to go from there (or even how exactly you’d sync the PLL). I found this link http://codeandlife.com/2012/10/09/composite-video-decoding-theory-and-practice/ which seems a good explainer of the problem at hand. I haven’t search much more, but the general concept is “composite video decoding.” It should definitely be possible, and possibly not hugely complex, but it’s definitely beyond me, for now.

There used to be handy IC’s that would do the composite decoding for you, and with those a Cadet-esque composite-to-RGB module would be fairly easy, but since “no one” cares about composite video anymore, they’re no longer made. One I found that seemed particularly suited to this is the TDA3330. It was primarily made for decoding composite video that’s fed into a CRT tv in order to drive the picture tube, but I found an application note that was for non-picture tube purposes that seemed promising (though I think the output levels still need to be attenuated quite a bit to get to LZX levels). I ordered a couple of second hand chips from somewhere just a week ago but haven’t gotten around to trying to use them yet.

You can find composite decoding ICs that are in production now, but they’re designed for modern devices so they’re usually very fine pitch and not very DIY friendly (like QFN, etc), and on top of that they decode to bitstream (for use in some sort of digital context) instead of to analog RGB.

A better bet is probably a standalone composite to RGB converter. I’m not sure what’s available, but I imagine there must be some, somewhere.

(But if you (or anyone) does come up with a nice DIY converter, I’d be super interested! Here’s hoping!)

Oh and here’s an application note that I think it for a digital decoder, but has a decent explanation of how decoding has been done analogly: https://www.renesas.com/us/en/www/doc/application-note/an9644.pdf

Thanks for all of the information Joe. I have to admit after looking into it further I think a project of this scale is a bit over my head as well. I’m not an electronics expert by any means, more of a tinkerer. I have looked into a standalone composite to RGB converter, but I was told that it wouldn’t be compatible with the Memory Palace because it doesn’t adhere to the LZX standards. I’m not sure if there is a way to remedy that or not.

As another, more immediate option I’m wondering if I can route the luma out from the Cadet III into the MP for monochrome video. If that works then I think I could live with that for now while saving money for either a Visual Cortex or TBC module to bring video in.

Either way I will still keep looking into this to see if I can come up with a relatively low-cost DIY solution as I’m sure there are folks who could benefit from it.

Yes, I have a composite to YPbPr converter that also has an RGB option, option but it’s no the 1V standard used by LZX. Using this converter with the Visual Cortex allows me to go from color composite to 1V RGB. The TBC2 should do this as well.

There is someone working on a DIY module to allow the Visual Cortex to output RGB, which it does on pins on the back of the Cortex (it only has native composite, S-Video, and component out on the front). This will allow the Cortex to go into the Memory Palace so it’s last in the chain.

Soooooooooooooooo I’ve ordered a MemoryPalace and was thinking on how my workflow could be with it! And to be honest I would love to use the MP as final stage + encoder because of the HDMI outputs… The problem if I do it this way, I won’t be able to use my Visual Cortex’s mixing+keying section (which I love and use a lot) , because cortex don’t have RGB LZX lvl outputs, so I can only use it as encoder final mixer… unless [PNG] I want to use the hidden treasures of the Cortex, pre-encoder expa…

It’s best to think of Memory Palace as an expansion module to the modular video synth system that starts with Visual Cortex as the core module. That’s the intended usage of the design. There are ways to use it standalone (just feed oscillators and audio into the RGB inputs, or get a couple video oscillators like Prismatic Ray as your sources, or use stills) or with monochromatic video sources (Cadet 1+Cadet 3, Vidiot, etc), but to get external video in, you’ll want Visual Cortex or TBC2.

That said, this stuff is meant for experimentation… you can patch your external RGB or YPbPr video source directly in with some adapters. You just won’t be properly DC restored or synchronized. You could have fun experimenting though.

To be clear, we don’t have our format of 1V patchable signals because we’re trying to be proprietary or something – it’s so that you save money and have more expandability in the long run! If every module had external video inputs, they’d all be a lot more expensive.

I use this Composite/S-Video to Component converter with a visual cortex.

It appears to be OEM’d by Cypress Technology.

Hello! Long time lurker, first time poster. I bought myself a Vidiot a long time ago but have decided to start taking things a bit more in depth and have begun to DIY myself a larger system. Composite conversion over to RGB in the analogue realm is super enticing to me, and I was very grateful for the above post regarding the TDA3330. A quick google of the chip revealed this document here: https://static5.arrow.com/pdfs/documentation/ons/application%20note/an1019-d.pdf which details schematics for something that seems (to my beginner’s mind) to be exactly what I was looking for. I had half a mind to go scrounging for bits (the TDA3330 itself is obsolete as pointed out but is available on Ebay, as are a few of the other necessary goodies like the trap and MC3346) and lay a board out in Eagle, but before I did that I just wanted to check that it indeed was going to do the job as advertised, or at least in the ballpark. Seems like it? The outputs here are designed to drive a picture tube, which obviously wouldn’t be necessary for my application (be pretty sick though) so I’m assuming I could omit the buffers there or replace them with some LM6172’s to temper the output into the 1V standard. Hopefully this doesn’t seem like tilting at windmills?

I can’t really comment much on the TDA3330 or the decoder circuit they show, having no experience with it, but bear in mind it looks like there are a few places you might have to tune a bit, like “gate delay” and “gate width”. I’m not sure but I’m guessing that’s part of a one-shot used for blanking or some other sync timing, maybe?

so I’m assuming I could omit the buffers there or replace them with some LM6172’s to temper the output into the 1V standard.

You could replace the output buffers with LM6172’s but you can probably also just use the existing output buffer circuit there, though you may want to adjust the +12VDC there and some of the resistors to get your 1V output. 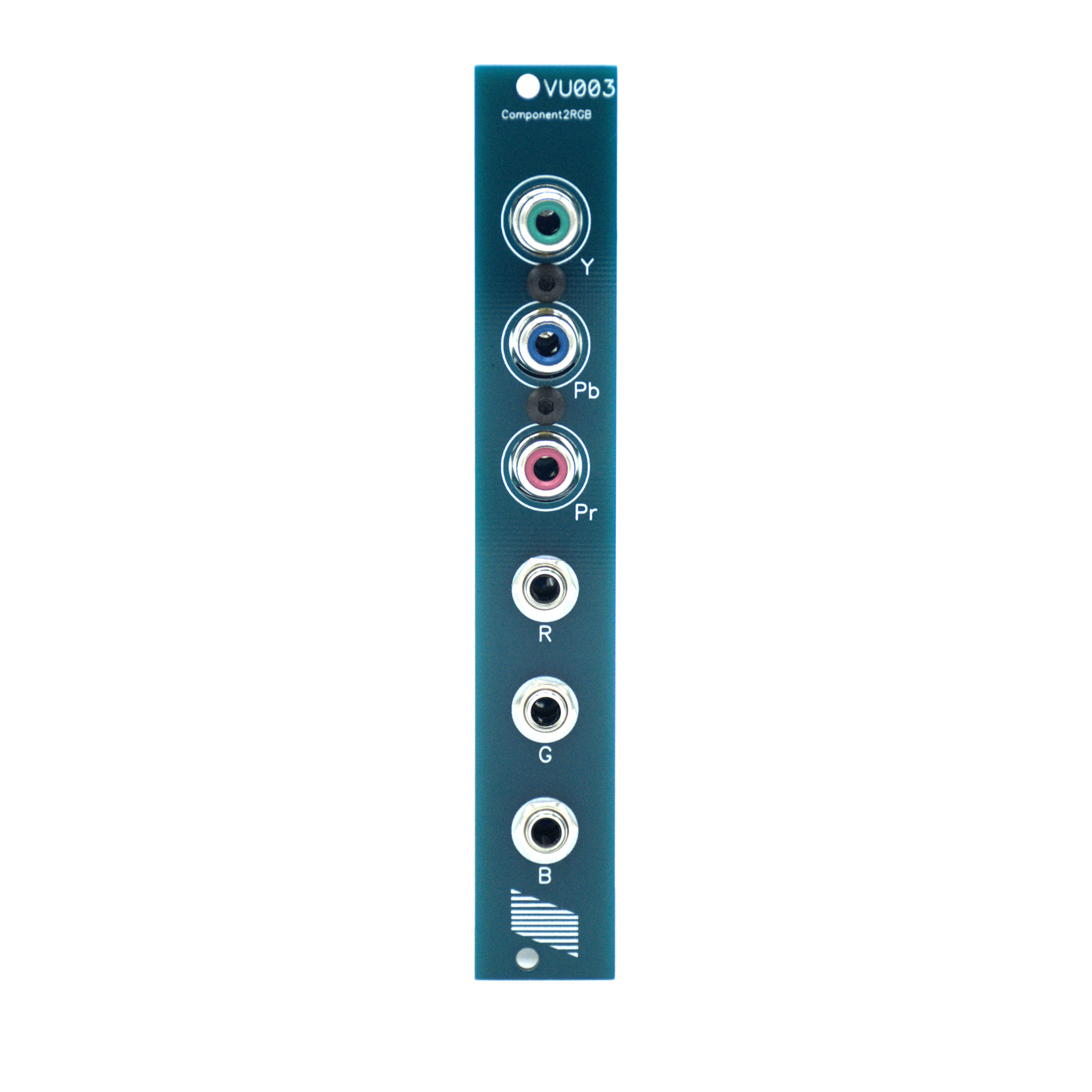 Component/YPbPr to 1V RGB colorspace converter, to process a component video source into a video…

There are some Memory Palace owners who are using it to bring in external video.

I’ve been going through the schematic posted above, and I was all ready to pull the trigger on getting some NOS TDA3330s and doing some experiments, or at least trying to. There is one part that has me stymied though, and that’s the 400ns delay line which I thiiiiink is used to shift/align the color sub carrier? I’ve only been able to find delay lines that work with pulses for digital systems, but this delay line needs to be an analogue one. Does anyone know of something that might work here?

Does anyone know of something that might work here?

You’ll probably have to find a NOS part, or borrow one from an old VCR or TV, to find a delay line suitable for the TDA3330. This is why Composite to Component decoding (these days) is usually done with digitizer frontend ICs like TVP5150AM1, etc. If you can find a batch of suitable delay line parts though, or figure out how to build one out of an array of discrete components, an analog decoder project would be cool!