Hi! Is there a need for some kind of TBC when capturing the Vidiot with Blackmagic Intensity Shuttle? I’ve only used the Vidiot this way and I’m experiencing quite a lot of “drop outs”. Thanks!

Yes, never had any issues before…

So this behaviour isn’t to be expected then?

Thanks for the reply.

Well there are some variables at play before we can reach any conclusions on what’s going on. I can tell you that the Vidiot here in our lab records fine with the Intensity Shuttle. Are you using the USB or the Thunderbolt version? Does the Vidiot display correctly on a monitor?

I’m using the Thunderbolt version. Have only run the Vidiot into my computer via the Intensityshuttle so far. No analog monitor around at the moment… 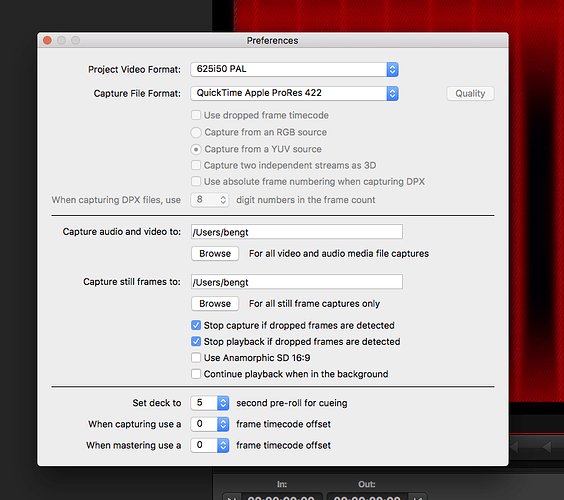 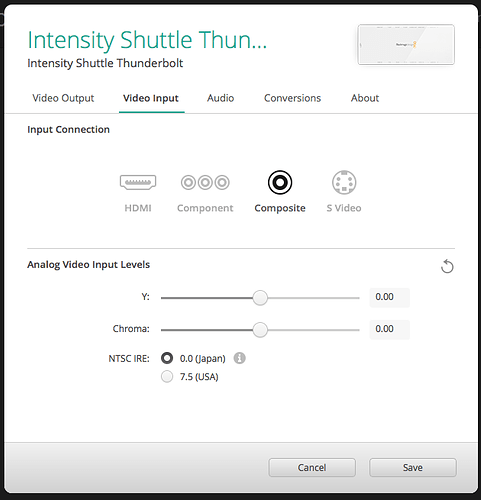 OK cool – settings look good – do you have the same behavior (dropped frames) when capturing both the composite and luma outputs? Have you tried NTSC, just to see?
Do you have an external video source fed to the Vidiot input (if so, which – and if not, try this and see if you see the same behavior.)
We’ve heard reports of some oddness between Vidiot and the Intensity Shuttle before – that wasn’t seen on other devices (like the Ultrastudio Mini HD), so I just wonder if the subcarrier lock range on the shuttle is narrower than the Vidiot likes to send. We just haven’t been able to re-create the issue here in the lab yet so this troubleshooting is helpful (thank you.)

Yes. And also tried NTSC, by flipping the switch on the back of the panel. When using PAL settings on the Intensityshuttle I get a distorted image, when using NTSC settings I get no image at all.

Have not tried with external source yet. Will do tonight!

Ok, so I tried to feed an external input into the Vidiot and then… IT WORKED!!! No dropouts at all. Of course, my old VHS needs a TBC, but my camera and my PS2 is very stable. Even when the external input is not present in the output from the Vidiot there are no dropouts. As long as there is a signal in to the Vidiot it seems to be ok. So why is this?

I just tried my friends Vidiot with my Intensityshuttle and that one did NOT have any drop outs. So I guess there is a problem with mine?

Sorry for the slow followup on this thread, I’ve been writing code for Memory Palace for most of the past two months and haven’t kept up with the forum as well as I’d like.

So this issue is something I’m currently investigating, and appears to be an issue shared with the Cadet I Sync Gen as well, which the Vidiot Sync Generator is based on. The issue is that Vidiot’s sync timing is controlled from a VCXO (Voltage Controlled Crystal Oscillator), and that the resting frequency of the crystal – with no external video source applied, is just outside the range of the Intensity Shuttle’s input decoder range (which does not have a TBC).

Given that any of these parts will have some tolerance from unit to unit and it’s a case of resting frequency, this explains why some units appear to work and others don’t. It also explains why connecting Vidiot to a different source corrects the issue, because Vidiot locks its own timing to that other source.

Back in the analog broadcast days everything had to be synchronized to a master sync reference, and it wasn’t as simple as plug and play like we expect these days with video.

What I need to do is some formal measurements of the resting frequency of Vidiot, and do some VC sweeps of its crystal across several units to characterize the range to which the Intensity Shuttle

The Intensity Shuttle can also be a bit of a pain in the ass for a lot of users. But it’s the cheapest way to get a professional quality recording capture with high color depth (important for video art!). If you can afford it, the UltraStudio HD Mini is much more of a problems free workhorse, and I’ve had no problems capturing Vidiot with it.

In any case, solutions:
– Upgrade your capture solution (we should stop recommending the Intensity Shuttle, also)
– Synchronize Vidiot to a camera or DVD player while capturing
– Use a TBC (like the Edirol V4 Mixer or upcoming TBC2 module) to process the analog signal before capture (this can only improve the capture quality anyway!) The Canopus ADVC300 is a capture box with built in TBC I used to own, it is great and you can probably find it cheap.

When I have time to investigate the issue in more detail, I’ll have more to say. If this is going to be a continual issue on more than just one capture device for Vidiot owner’s, we’ll figure out some way to offer a sensible modification path.

Hi
I’m having exactly the same problems as described with a Vidiot and an Intensity Shuttle. It all works fine if a camera or Andor1 media player is connected to the Vidiot, otherwise it’s endless drop outs or sometimes no display at all. It works ok through a V4 mixer but I notice some horizontal lines in the display which aren’t there if I use just Vidiot with something connected.

Bumping this topic for research sake as I am just in the process of updating my rig to hardware hd! (yipee!) And I am doing some test on my equipment. :))

So long short of it I also am experiencing some weird horizontal lines in the Vidiot when I run it through my setup. 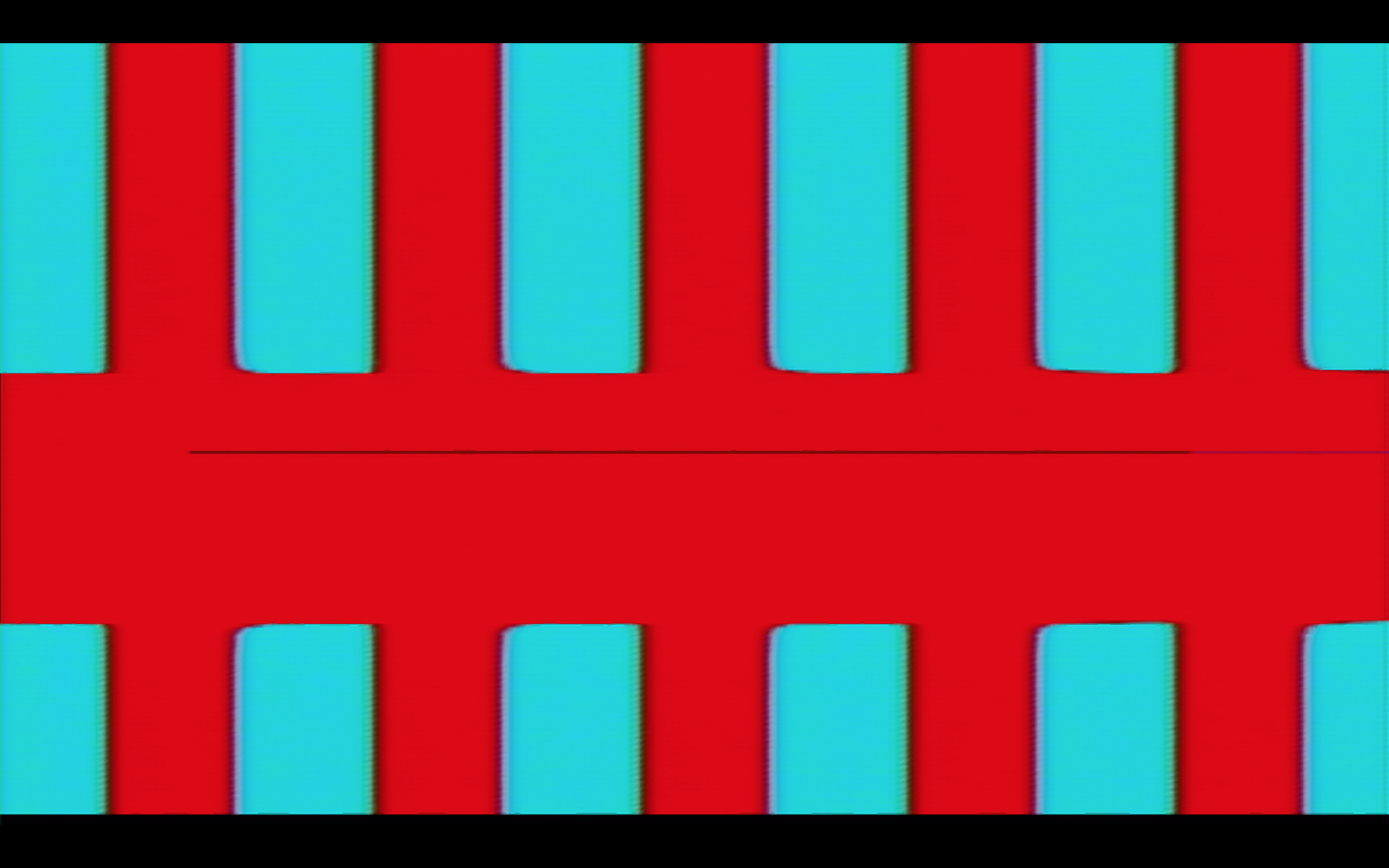 However! I noticed if I run the Vidiot thru the V4 as suggested I don’t get any dropout or horizontal lines! pic below vv 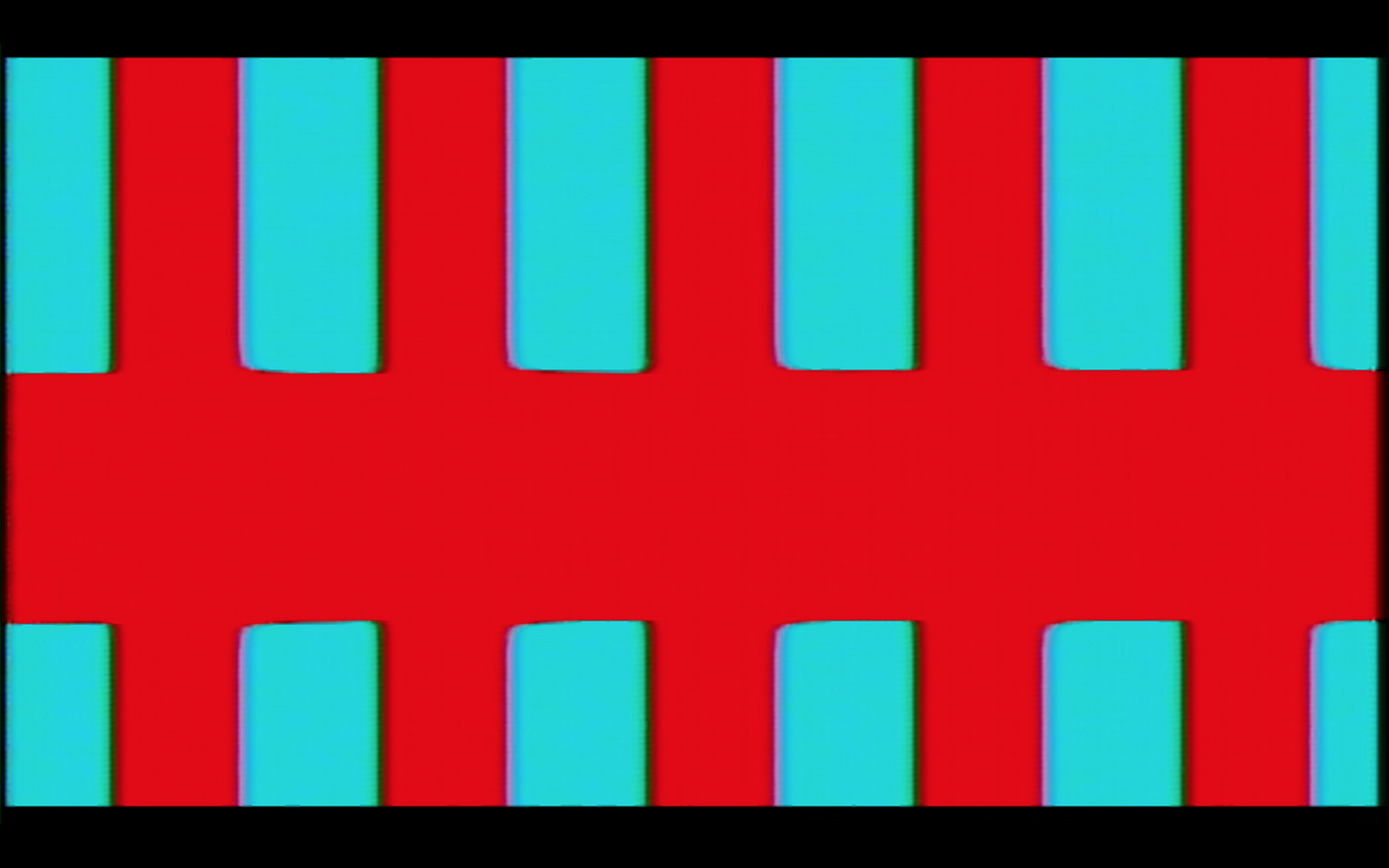 Interestingly if I run the Vidiot into the composite on the BM Shuttle with SD resolution I don’t get any drops or lines either. No pic but u get the point.

I am swapping out my BM Shuttle recording for an Atomos Ninja V that I should be getting in the next few days. But let me know if you want to test some other stuff out. :)) I am gonna break out my euro lzx system too and I know everyone here loves there workflow posts

Hey! I am fairly new to all this but am experiencing the same issues mentioned above: horizontal lines and frame drop out during capture.

I tried plugging in my video camera to vidiot input and that does seem to help but i still get dropouts, (no horizontal lines though).

I am considering ordering the TBC2 but I am confused how I would get video output back out? would I also need to get ESG3 or is there a cable / adapter that can go from 3.5mm to the RCA cable?

also if I had more modules in the future, would the placement of the TBC2 matter in the signal chain?
Thanks!

No need for a tbc2. Use a mixer like ave 5 between vidiot and the bm analog to sd. This will get you a better sync.

And if you get a tbc2 you could use the encoder inputs of the right side of the vidiot.

I dont understand your cable question.

If you added a TBC2 to a Vidiot, you would connect the TBC2 sync output to the Vidiot camera/sync input via RCA cable. You would connect the video signals via patch cable — probably either the TBC2 Y (luma) output into Vidiot’s luma processor or the RGB outputs into the colorizer (though you can also patch into any of the inputs). Video out from Vidiot would be via RCA.

This should fix your sync problems, but sync can be tricky sometimes and it may not. Putting something after Vidiot with a TBC like a mixer, as recommended above, is likely more reliable (and cheaper).

But if you are thinking of expanding your system anyway, a TBC2 could be a good addition. That being said, I surmise that you will quickly decide that those two are not super exciting on their own and will want to add at least an FKG3 to be able to mix between two sources. My own journey was “maybe I will buy a few modules to supplement Vidiot” and has now ended up with 2+ full cases of modules. It’s a slippery — but fun — slope.