Ok, after a lot of searching to see if I can find the proper information I’m at a loss.

My set up currently consists of a Vidiot, an audio eurorack system, a handful of Cadet/Castle (+Staircase) modules and now an Edirol v4. The big thing I feel I’m missing is things for shape generation (this rig is an insane pattern generator). So I decided ramps would be the first step, along with a Doorway that I ordered from Perfect Circuit and am waiting patiently for.

So I ordered and built the Cadet sync generator, ramps, and oscillator. But I can’t seem to get anything out of my ramps, or sync the oscillator. As far as I understand it, I can take the sync in or out from either Vidiot or C1. I’ve tried this and seem to get nothing.

So a few questions about syncing the 2.

Also it’s completely possible that I’ve made a mistake during the building of these Cadet modules as I am completely new to DIY building. So a follow up question would be are there any diagnostics I could perform with these modules to see if it’s something that I’ve done? What are some common mistakes made when building these things and how should I go about fixing them if I have.

post pics of both sides of your populated boards so we can look at them.

Loop not needed – wouldn’t that be a feedback loop?

Ok, that’s something I don’t think would have tried. I’ll try that out hopefully tonight as well as take some pictures of the boards if that doesn’t work.

Good luck! Let us know how it works out.

Jonas’ method will work! But Vidiot also contains a dedicated sync output jack. This jack loops the input sync thru to it if the loopthru switch is ON. But if the loopthru is set to OFF, it outputs Vidiot’s native composite sync.

Option #1 (Vidiot sync to Cadet sync) uses the dedicated sync connections and allows you to easily slave the entire rig to another source (via Vidiot’s sync/luma input) easily. In this rig, Vidiot replaces the need for Cadet 2 and Cadet 3, which is nice.

FWIW, Vidiot’s sync generator, color encoder (output from colorizer), and VCOs all come from the Cadet schematics with only a few changes.

Well that narrows it down, I’ve tried all these ways and had no success, so I’ve definitely done something wrong during building.

I’ll post some pictures of the modules once I get them out of the case and try to do something about it this weekend.

Ok so an update in case anyone else has similar problems, the U5 chip was not programmed. Apparently there is an additional unprogrammed chip included in the mouser cart for C1 that ended up on the board instead of the preprogrammed one.

So now all is good, thanks for the help guys.

I ASS (it’s always something stupid), lol. I’ve had my share of things like that for sure.

I think I am having a different problem with syncing Cadet modules and the Vidiot.

Syncing the Cadet to the Vidiot, Vidiot sync out > Cadet 1 input, works fine and everything is happy and stable.

I think the problem might be with the Vidiot. I have an early production unit that doesn’t seem to go into PAL mode. When I set my Cadet 2 to PAL, my colors pretty much go away. When I set the vidiot to PAL or NTSC I don’t get similar results (colors remain). I know that some early production units are flipped so PAL is NTSC and vice versa. I run mine in the PAL position because I get some jagged diagonal lines when using the keyers when I’m set to NTSC. When testing out this syncing issue I tried every combination of PAL and NTSC positions with no luck.

So is this an issue with the Vidiot or my Cadet modules?
I’m not too worried since I have a fine workaround, syncing the Cadet to the Vidiot, but I would like to have the full flexibility.

Thanks for any input!

ith the Vidiot or my Cadet modules?
I’m not too worried si

Are you power cycling both systems (Vidiot or Cadet) after every change to the desired sync setting?

If you had a problem with NTSC/PAL being swapped it was only the first 10 units shipped and you would have got a note inside the box that explained the issue. If you didn’t receive a note in your box, it should be OK.

Do camera inputs or other sources work fine when input to your Vidiot?

I think my order number was 35, but I did get the note in the box with my unit.

That is what has been driving me crazy. Cameras and my iPad (touchviz) have been fine with the vidiot. I have had trouble running a pxl2000 (with composite mod) into it, but that has been the only issue. The rest of the cameras were old tube ones.

That does seem very odd. I can assure you there was nothing preliminary about the units that had an issue with the PAL/NTSC setting – that was a silkscreen label print error only. Do the same cameras and iPad work okay as inputs to your Cadet system?

Does the Cadet system lock to the Vidiot when the Vidiot is locked to the cameras/iPad?

At the moment I don’t have the Cadet video input module. I’ll have to check again, but I think the Cadet still locks to Vidiot when the camera/iPad is connected. I think I was just running the clip from the Vidiot to the Castle ADC then back into the Vidiot colorizer, so I probably should test that out a little bit deeper.

Just verified that
1: Cadet sync remains locked to the Vdiot when running my iPad into the Vidiot.
2: When I run the iPad into the Cadet 1, then run the output of the Cadet 2 into the Vidiot, everything is in sync.
3: iPad into Cadet 1, Cadet 1 pass through into Vidiot also works as expected.
For all of the above I checked output from the Vidiot and Cadet 2.

Also, the screen print on my Vidiot seems fine, with PAL on the bottom.
Here are some photos of the Vidiot on its own in PAL and NTSC modes. It’s weird. 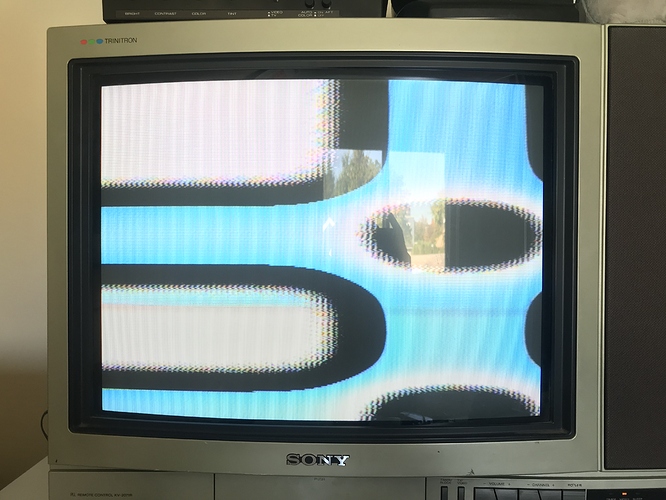 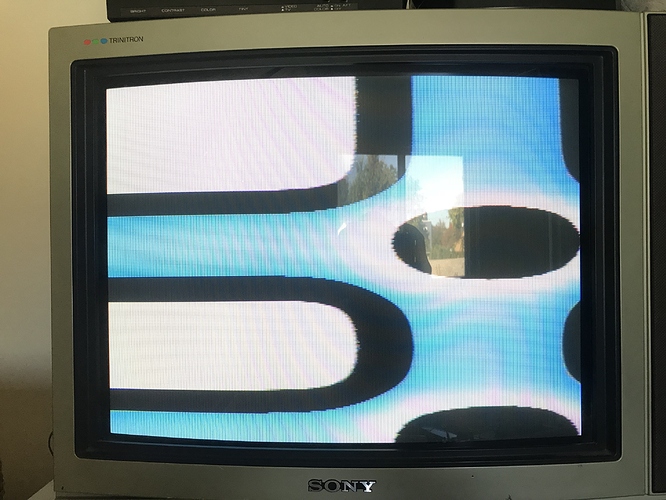 Looks like some extra capacitance or dry pad in the subcarrier oscillator circuit causing that anomaly in the NTSC subcarrier (which is definitely not correct.) We’re happy to clean it up and get it looking pristine any time. Does changing the loopthru switch setting change it at all?

Awesome! Thank you.
In both modes with loopthru turned off after the Vidiot is powered on the image turns black and white with thin, subtle red and blue diagonal (from upper left to lower right) lines. I’ll just post a picture. 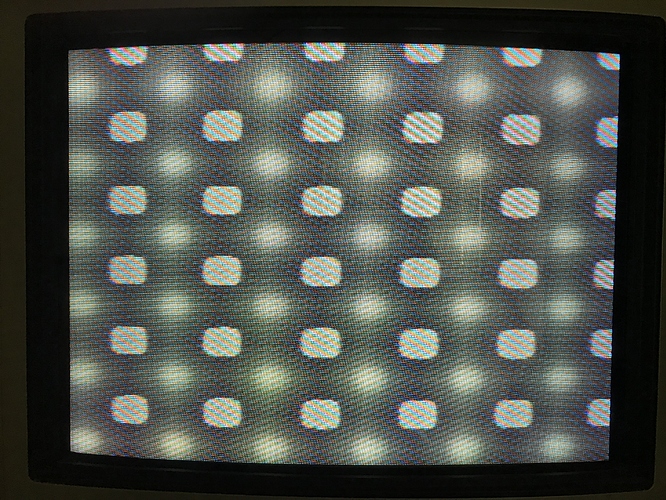 In PAL mode, powering up with loopthru off results in the same image pictured above, but rapidly scrolling from top to bottom.

Powering up in NTSC mode with loopthru off results in the same rapid scrolling, but with a full color image.

Cool, I would expect some instability with loopthru on but sync out/in not connected to anything. But definitely seems like your subcarrier is teetering on the edge of frequency range. Usually a quick fix with some hot air and isopropyl in the areas around the crystals on the rear assembly.

Hot air to dry the alcohol or to re-seat components? I’d be up to do it my self if it is the former.

Thank you for all of your help with this Lars.

Reflow any SMT caps/parts around the encoder IC (AD724, left side of the rear assembly). Make sure the crystals’ solder joints look OK (there is one for NTSC and one for PAL, both thruhole parts). Then a good isopropyl scrubbing of the whole area. Have a go if that all makes sense to you, or send it on over!