It’s not directly related to LZX system, but I have a question regarding the possibility of digitising some VHS with my LZX stuff.

In short, I found a goldmine of old VHS on bee biology that I would need to digitise for my work.
Thus, I wondered if I can do that with my current setup. Basically, I have a Blackmagic Teranex Mini Angalog to SDI 12G that I use to upscale my synth footage that I then record on a Blackmagic Video Assist 3G.

I thought I should be able to simply plug a VHS player into the Teranex and then record on the Video Assist, but am I delusional and do need something else? Finally, does anyone would recommend any specific VHS player for this task?

And one more question, would it be possible to add a VCR in the loop to do hard copy of the VHS at the same time?

I thought I should be able to simply plug a VHS player into the Teranex and then record on the Video Assist, but am I delusional and do need something else? Finally, does anyone would recommend any specific VHS player for this task?

Seems like that would be the way to go. If you care about optimal quality, I’d find a VCR designed more for broadcast racks than consumer use, and in an ideal world, it would be recently serviced/cleaned. The Teranex should be able to deal with whatever you send it, I’d imagine. If you have a VCR that provides raw Component YPbPr output then your capture quality is likely better.

Thanks a lot Lars! I will try that

If you’re on a budget and can’t afford a professional grade VCR, I would recommend any of the consumer VHS recorders from JVC or Panasonic that have S-Video output. The Terenex will accept a Y/C signal, you’ll just need an S-video to 2xBNC adapter. The quality of VHS is so poor that you probably won’t notice any difference between YPbPr and Y/C. Either of those component formats will be better than composite CVBS, which has many artifacts, e.g. “chroma crawl”.

Best of all, get an S-VHS deck, which has improved luminance performance relative to ordinary VHS. The S-VHS decks have better electronics, and even with ordinary VHS tapes, the output will generally look better than the output of a VHS deck. At least that’s been my experience.

Thanks a lot for the tips, that is really useful!

One stupid question, why do I need a S-video to 2xBNC adapter? I mean why the 2x?

A typical S-Video cable carries those in one cable, with one connector. Teranex uses individual BNCs for each Y and C. 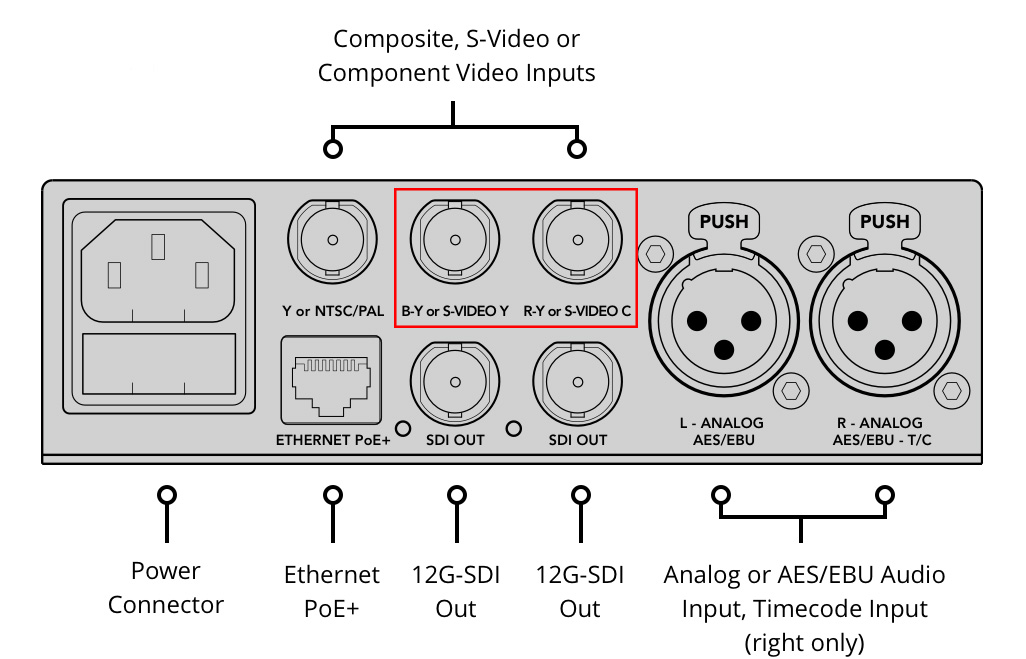 Ok got it! Thank you so much!

Some update here. I found a good VHS player picture of the back here:

However, when I send the signal to the Teranex to record the video glitches… A bit like if there wasn’t any TBC.

I uploaded a short sequence I recorded (link below). Any idea how to solve that? My Bnc cable is maybe not the best quality but I doubt it’s that. When I send the signal to another source (a CRT) it works flawlessly.

CRTs are usually going to be the most forgiving of all devices.

Somewhat ironically, sometimes professional devices are the most finicky about sync. I think the assumption is that they’ll be installed in a pro studio / mobile environment with rock solid sync, and boatloads of TBCs just sitting around in case there’s an issue.

So that goes for both the Teranex and your Panasonic deck. I tried to do some research on that model number AG-7730, but didn’t come up with much. The question, does it have a TBC or not? I guess some of the 7000 series prosumer decks have TBCs and some do not. I would hazard a guess that yours does not.

One thing that you can try is to send external sync to the Panasonic deck. It might not make any difference, but it’s an easy thing to test.

Again, ironically, cheap consumer crap VCRs, especially later models, may accept dirtier sync and output cleaner sync. So while the prosumer deck you have will give better image quality, it may be necessary for you to try a $10 VHS deck from a thrift store, just to get a signal that doesn’t glitch.

You can also shell out some bucks for a standalone TBC, but those are expensive these days. It might be possible to just loop the signal through a cheap, recent VCR to stabilize the signal. But really there’s no way of knowing if this will work without trying it.

Thanks for your answer!

Indeed it seems that the AG-7730 might not have a TBC. After some research I found that apparently these decks are not always coming with a TBC. Apparently it used to be on option and if it does it is via a separated card.

“this still relies on accessory cards plugged into the main chassis. Over time, the socket contacts oxidize and trim pots on the cards deteriorate, causing video artifacts. While these production-quality Panasonics were extraordinary in their day for their intended professional use, they are not optimal to use in 2011 for dubbing consumer tapes to digital. Aside from possible TBC card degradation, the video head specs in these “pro” units are too wide for matched playback of typical consumer or Hollywood SP tapes: they add spurious noise and grit to the image you would not see otherwise. Assuming the TBC and DNR still work perfectly, they might conceal much of this, but its still a poor match. Unless you already own the 8500 and 8700, I’d recommend the NV-SF200 “semipro” model instead: it has more consumer-friendly video heads and better-integrated more durable TBC/DNR.”

I will try with a consumer VCR and see what happens

Another thing that should be mentioned… you said the deck has been serviced. But are you sure the heads are clean? Even just playing one old tape can gum up the video heads. That usually looks like a grungy / crappy image, but it could lead to sync issues, too.

Ideally you’d have some freon TF to clean the heads, but I think it’s been banned. The alternative is 90% or higher concentration alcohol. Do NOT use ordinary 70% alcohol for first aid. The water in the solution could cause rust and oxidation on the heads. You will also need a very soft cloth, like the kind used for cleaning eyeglasses. Otherwise you could scratch the heads and/or helical scanning drum surface. That in turn would scratch your tapes.

Proper technique is to wet the cloth, hold it against the drum, and spin the drum with your other hand. The actual video heads are tiny little metal blips at the bottom of the drum. Make sure you hold the cloth so it contacts the entire drum surface. Only touch the inside part of the drum, never touch the outer surface that contacts the tape.

For the audio heads, you can use cotton swaps soaked in 90% or higher alcohol. Just be sure not to leave any cotton fibers behind.

Thanks a lot for that, I’m not 100% that the heads were cleaned but I will ask. Could unclean heads lead to the sync issues without showing up when the tapes are played on a screen? Because when I send the signal to a CRT (I tried two different ones) the image is perfect no sign of crappy image or anything else.

I will try to clean them anyway

I’ve read that cleaning the heads may improving tracking, yes. I haven’t tried it myself though.

Dirty heads can definitely affect sync, and CRTs are generally the most forgiving of devices.

Cleaning the heads may not fix the issue, but it’s an easy thing to check.

Again, just playing one old/dirty tape for a few seconds can gum up the heads. Your service person probably did clean the heads, but as soon as you start using the VCR you are making them dirty again. It is only a matter of time before the heads need cleaning. This is a skill that all users of video tape machines really need. There may be head cleaning tapes out there… or there may have been head cleaning tapes out there at some point in the past when VHS decks were in every home in the developed world. But cleaning the heads manually is much safer, easier, and gives immediate feedback. You can visually inspect the cloth to see any residue.

Thanks a lot for your advice! I will learn how to clean heads it seems to be crucial while using VCR

Few updates on my side, which I hope could help other people as well.

So even after cleaning the heads, the signal is still unstable. I did some research and I’m pretty sure the deck I have doesn’t have a TBC which explain this ^^. I found a consumer deck with TBC included and this works much better, I had to clean the heads as well so that was a really useful tips.

However, I still have some syncing problem, really not as bad as before (maybe a glitch every 10s but highly irregular…). It is odd (maybe not in regards to the medium), but it only does it with certain tapes. With certain tapes there isn’t any problem and I can capture that cleanly with the Teranex and other jumps… My only lead is that tapes are older and less stable. Could be that a thing? I thought I do copy these old VHS into new ones and see if the signal still glitches in case it would be the tapes themselves.

Let me know if it rings any bell

All video tape is not created equal. Storage conditions can affect playback as well. I had some tapes that they were full of dropouts and clogged the heads frequently. I think I gave up on digitizing that. (Speaking from memory - I attempted to digitize and throw out my VHS in 2008)

Thanks for your answer! Indeed tapes are messy… haha!