In some comment somewhere, I mentioned that something like this should be fairly easy to make (in order to sync anything that needs 14-pin sync but not the blanking signal), and, well, now I want to try my hand at making it. This is pretty much just the LMH1980 reference circuit hooked up to some Schmitt inverters: 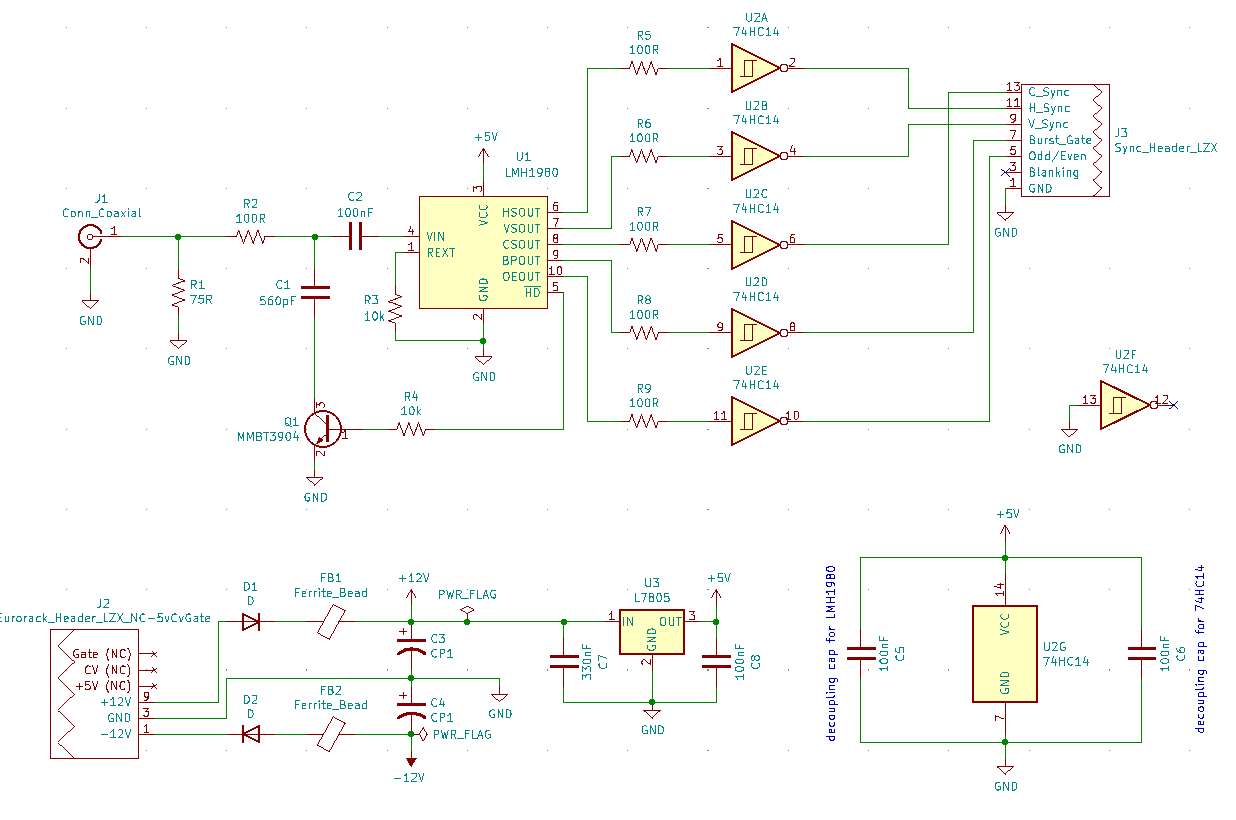 I think the single inverter per output is right since according to my notes the 14-pin sync format is positive-going signals, but the sync output by the lmh1980 is negative going, right?

This should let you sync the Cadet 4 Ramp Generator and Cadet 9 VCO in an RCA-sync system. Also, I think I’m going to tack on some jumpers that when closed will also send H and V sync to the CV and Gate lines on the power header, so that it could also (optionally) be used to sync Castle VCOs.

I’m also thinking of maybe making it be a module (instead of just a PCB that you need to mount (or leave dangerously dangling) in your case. Then it should be easy to also add some H, V, and Frame sync output jacks like the Cadet 1. But maybe that’s a bit too much feature creep. I also haven’t decided on whether it should be through-hole or SMD. The LMH1980 is SMD, so maybe the whole thing should be, since I already have to deal with that one part? It could make for a nice small board if SMD, probably.

Technically, since it uses an LMH1980, this should also convert from HD RCA sync to 14-pin sync, but I’m not sure how useful that’ll be… The Cadet 4 Ramps definitely would need to be recalibrated (and maybe have some parts swapped) to be useful for HD rates, and the Cadet 9 VCO might need to be recalibrated too (I can’t remember what its trimpot is for).

So, what do you think? Would this be useful to you? And if so, any requests/suggestions? And from an electrical standpoint, do I have it right?

I sort of wanted to make such a pcb as an addon for my sync busboard, but had not started yet.
Maybe we can make something together, like a module & busboard thing, where the module connects to the busboard and distributes the sync signals ?

That looks good! You should go through with it.

I figured I probably wasn’t the only person thinking about this.

Module + busboard could be interesting… I don’t think we’d need a different busboard from your sync busboard, would we? Then a 14-pin cable like the kind you’d use from the sync busboard to a module could be used to connect this sync converter module to the busboard. Or did you have something else in mind? I could even see it being a PCB that plugs directly into your sync busboard – if we keep it to pretty much the schematic I posted it might be able to be small enough so that could make sense.

I think I’m leaning towards definitely making this a module, since I found a lot of use for the front sync outputs on my Cadet 1. I’ll try to play around with some layout soon and see what feels good.

The thing I’ve used them for the most is syncing audio oscillators. All the oscillators I tried did OK syncing to frame or v-sync, and one even managed to handle h-sync OK (Intellijel Dixie 2+, though it was nowhere as nice a proper video oscillator). I also use the front sync outputs to sync my Castle VCOs since they’re not on the same power bus as my Cadet 1.

Another thing I’ve done is use a voltage controlled switch (a Doepfer one) to switch between video signals, and I used the frame sync to time it to that to reduce tearing, using a spare VCA as a makeshift AND function that AND’ed the frame sync and a randomly generated trigger.

Frame sync output is also a way to clock sequencers without frame tearing. You probably will want to divide the frame sync down before clocking the sequencer.