Since @creatorlars very kindly shared a soft keyer block diagram I’ve been playing about with simulations and started breadboarding a soft key with the goal of putting a DIY module together.

I wanted to see what the community thought about HP size versus functionality. Do I keep it to 4HP and create just a simple soft key module which can then be patched to a VCA fader? Or would you prefer to have an integrated VCA and the relevant controls for a soft keyer in say 6-8HP?

I currently use mostly 4HP DIY video modules and have plenty of spare VCAs in the rack so 4HP makes sense for me but very interested to hear everyone’s thoughts.

More HP so you can fit Gain and Threshold pots on it with associated CV input / attenuverters on both controls.

Integrated IMO, so we’re not needing another VCA

4th vote for the same

I will elaborate a little. I’m not aware of a 2HP VCA, so if you had 4HP soft key without onboard VCA I am going to need another 4HP for an extra VCA to make it work, and we all know the pain of wanting more HP.

6HP is still a compact size, perfect width for a single column of full size alpha pots (I hate the Song Huei 9mm trimmer pots, too much wobble) and 2 columns of jacks. Also 4HP modules next to each other with full sized pots can get in the way of those born with sausage fingers!

I personally never have enough VCAs though

I’ve come from the Cadet / Castle world of 1 function per 4HP, so my initial idea was just a soft key version of the Cadet VIII Hard Key generator but definitely understand the desire to have more functionality in 6HP.

Will hopefully have some time for breadboarding soon, reasonably happy with my circuit sims so far. 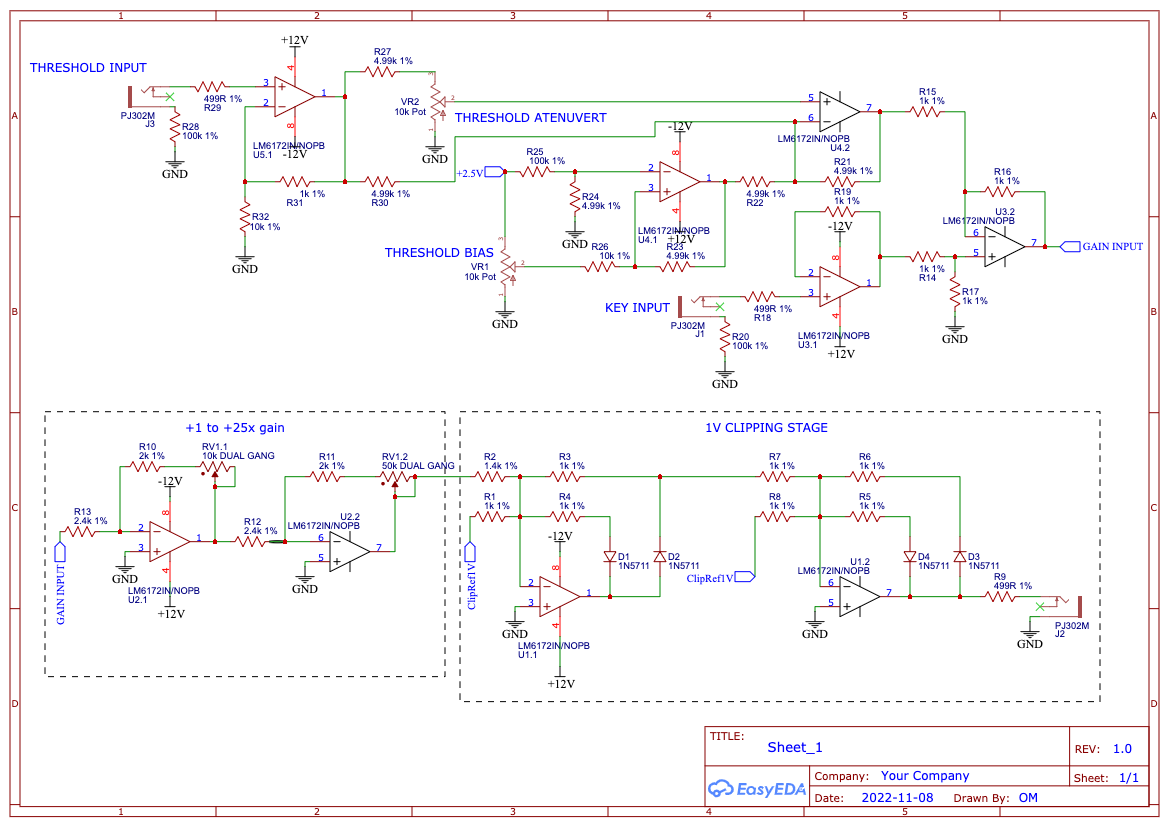 Here’s my current working schematic for the key generator (without any internal VCAs yet). Would really appreciate people digging in and critiquing! I’ve taken the majority of the blocks from different Cadet schematics, the precision clipper from Cadet II, the threshold input and attenuverter from Cadet VIII Hard Key. U3.2 is the differential amplifier for keying the input against a threshold voltage.

I’ve not included circuitry for power, 1V and 2.5V reference voltages. U4.1 can be swapped for a non-video op amp, just copy and pasted for ease in this early version.

I see a few things to note:

Your threshold input and key input jacks have the ground pin connected through a 100K resistor instead of the resistor terminating the input signal.

The output jack, J2, should be connected to the other side of the clipping diode.

I also suggest tying your input jack switch pins to ground as the LM6172’s have a nasty input bias when just terminated through 100K.

Thanks Fox! All great shouts.

I haven’t published a reference circuit, but a block diagram is fairly straightforward.

Here’s how I do it after trying many ways:

I tried lots of specialty high gain parts or integrated high gain VCA parts that were expensive and troublesome over the years. What works best in the end is just doing multiple stages after the VCA block, with 4x - 5x per gain stage, and use a separate op amp per stage. Two 5x stages in series it gives you a total gain of 25x, which gets a decently hard edge without going too crazy (this is about where Topogram sits for example.) Cadet II RGB Encoder is a good reference for a precision Black/White clipping circuit.