I was laying out a PCB for some video experiments. While doing this I thought it might be interesting for others, too.
The idea is that you an solder a prototype and connect it easily to the headers with wires or jumpercables. The voltage sources are placed near the rails of the ‘breadboard’ , so you can connect +12v or +5v to them.
The GND rails are pre-connected.

note: the values in the schematic are not yet corrent. I’ll post bigger images later 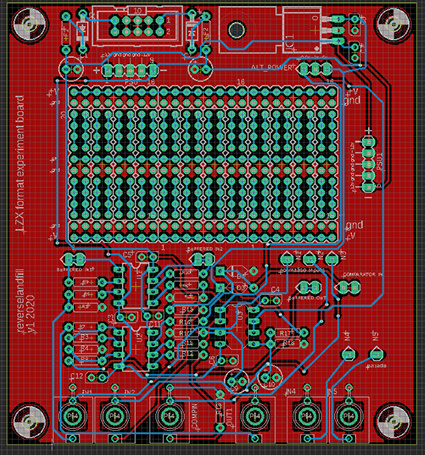 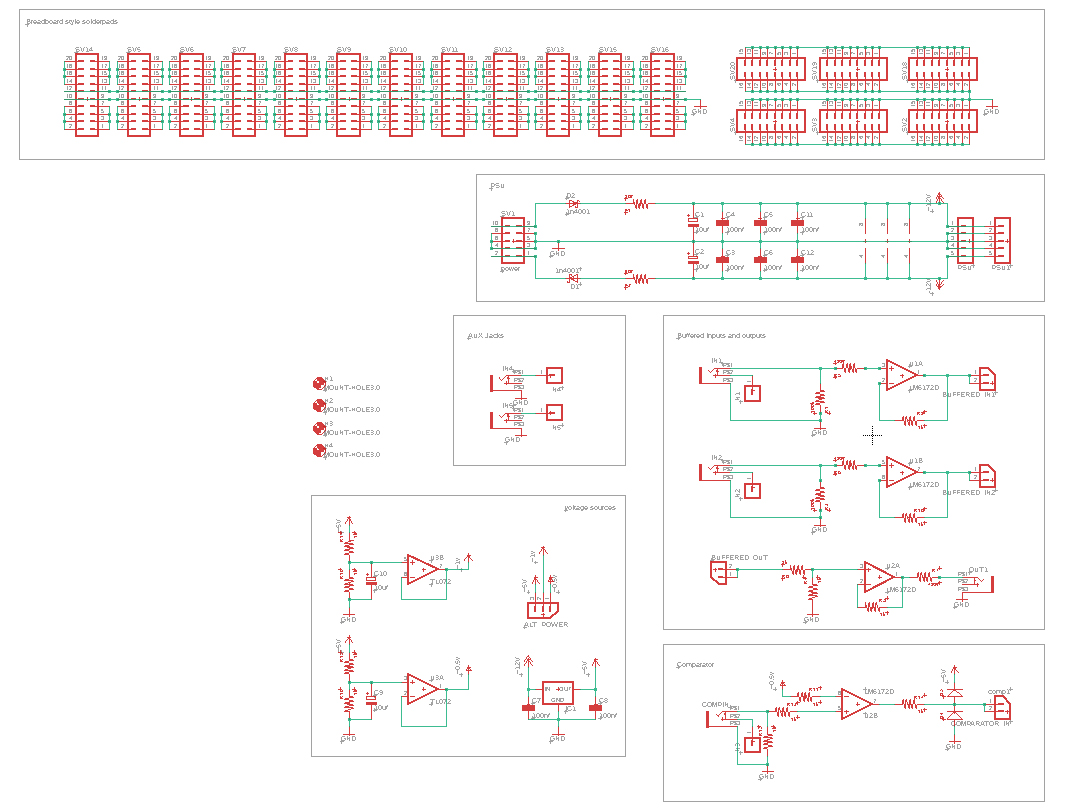 Any suggestions on additional features?
I was thinking :
an extra comparator (negative high for CMOS reset, maybe)
some potmeters
a big connection header instead of those loose pads
negative voltage sources like -1v ?

This is an excellent idea!

Maybe a few 10K linear pots and some switches? I know they’re easy enough to add externally but it would be great to just have them there.

good idea.
I might make 2 versions, a small and a big board

This is a really really cool idea for anyone wanting to experiment and prototype new video synth circuits. I’d love one

Like @VisibleSignals suggested, pots & switches would be great for control. Does an actual video input (composite or S-video with decoder) make sense or would it simply be too bulky? I can easily imagine that but it’d be great if I was wrong

I think that would not fit. too much electronics envolved.
but maybe for the bigger board. if somebody can help …

What if the design was a slim module, say 8 HP with two rows of knobs & jacks, with 1 or 2 10pin sockets (same as power) that connect to an external pcb that resemble a breadboard or your design. Then these finished PCBs or prototype circuits could be swapped in and out of a working system.
Damn, now I have to learn Adobe Illustrator to design this panel suggestion as my description is amateurish at best

yes, that is also an option.
I’ll make some versions of this idea and post 'm here

version 3 has to be worked out , input & output buffers would be handy.
maybe I can make a ‘standard’ layout that allows the user to choose if an opamp is used us a buffer or comparator , with some clever part placement.

thanks to all the open schematics of the Castle and Cadet series this is made possible!

It still might be useful to be able to configure the opamps to make input buffers or comparators, so that you could have a custom amount of functions for each prototype design.
I have to see if I can design a setup that is workable.

Small switches can be placed in the ‘bread area’ 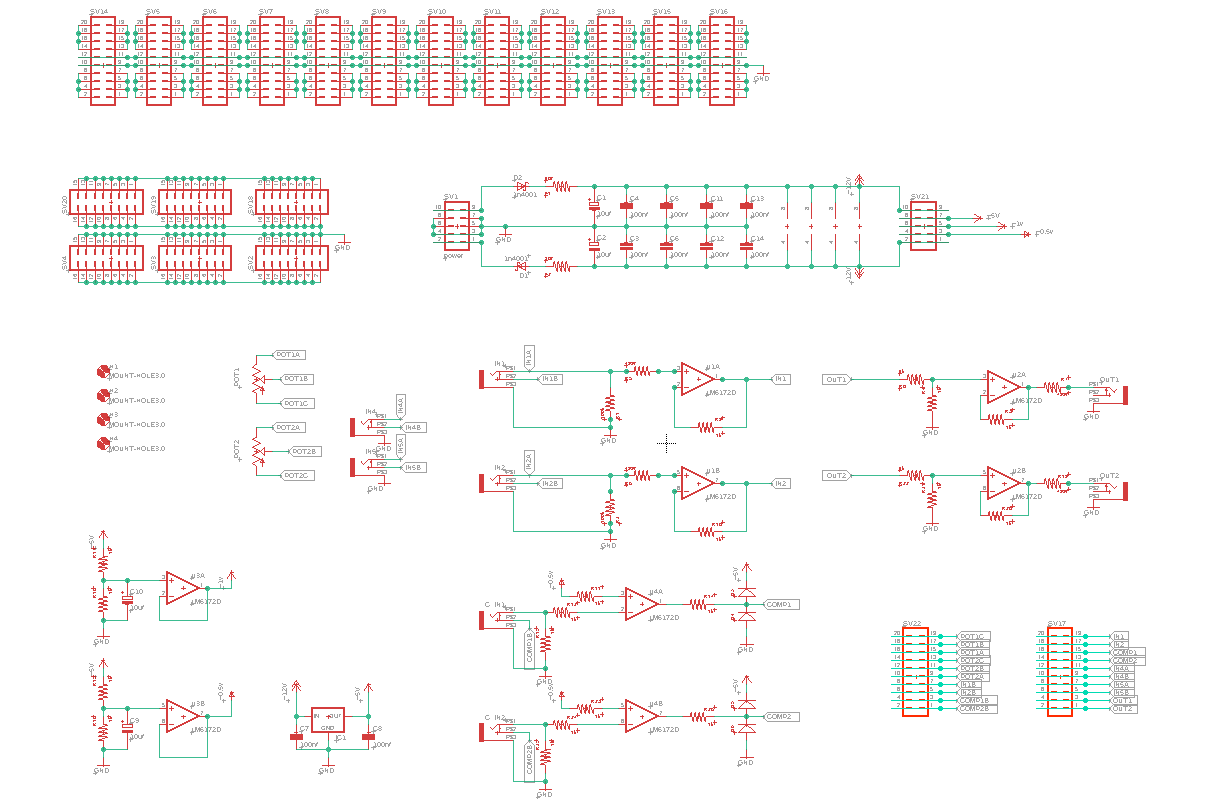 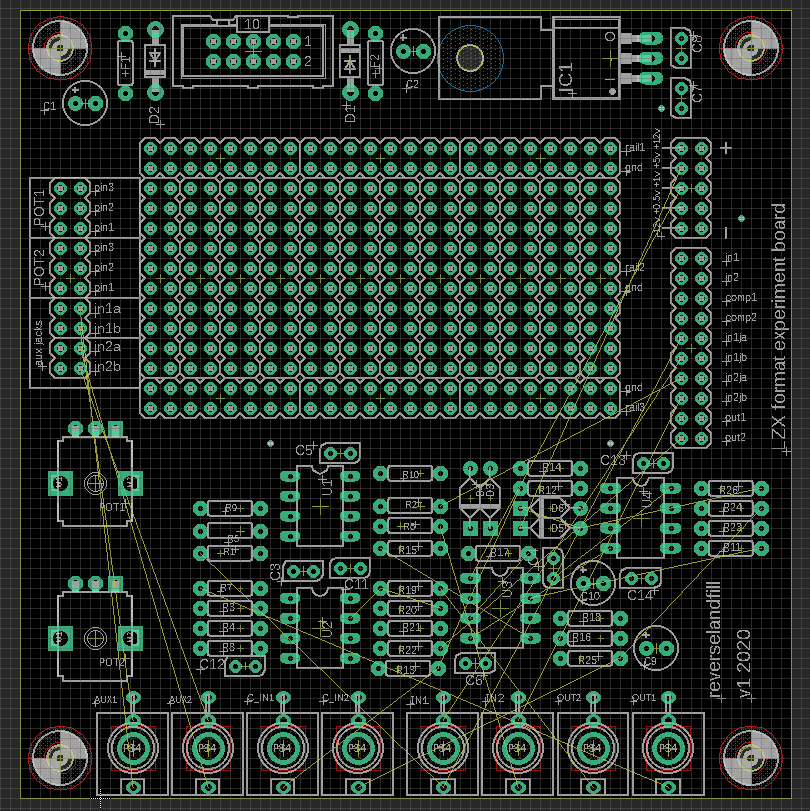 Optional resistor to GND from the -IN of U2A/U2B and U1A/U1B so you can configure gain on the outputs/inputs.
The schematic as posted has -5V, -1V and -0.5V, which doesn’t match your description.
Is there some reason why the comparator inputs are inverted? Maybe make it jumper selectable to swap the + and - IN pins on those op-amps?

Thanks! I’ll check the schematics tomorrow.
I want to make this as open ended as possible.

the 1v, 5v etc have indicator lines (those are not minus signs)- I might change this for clarity

I think I will try to make all opamp configs possible. . . just have to find a way to make it easy to operate.

as for the comparator polarity, I used the opamp setup from the Castle schematics.

@syntonie gave me a tip on how to add a composite in & output . that is interesting too

Might be handy to have dual DIP8/SOIC8 footprints for the LM6172’s, since the DIP 6172’s aren’t in production any more? Though people can use those cheap converter PCBs to accomplish the same thing, so it’s not a huge deal.

(This is something I’m dealing with in my own project right now. I want to figure out how to make such a dual footprint in kicad, but I’m having too much fun with the programming aspect of my module right now to bother with that. Haha.)

LM6172IN/NOPB (DIP package) are still marked Active by TI, so still being manufactured. The old versions without the /NOPB extension (which contained lead) are EOL, so that might be the source of the confusion.

Ha. I could have sworn I carefully checked that on Mouser and they said it was EOL, but I guess either I wasn’t careful or I didn’t actually check! Whoops.

Mouser has an incorrectly labelled “Product Discontinuance Notice” from 2018 which is actually a Product Continuation Notice that TI has moved manufacture of LM6172IN/NOPB from Grenock, UK to Dallas, USA

yes, that what I thought.

maybe the eurorack version will be SMD , if that means I can fit it on a single pcb

do you know snapeda?
it has an immense amount of footprints for most CAD layout software, including kicad, free for download (you have to make an account)

I’ve heard of snapeda but never checked it out. Now my need of this dual footprint isn’t so great, but I’ll remember this for next time.