The LZX Cadet series is now archived in its entirety. Please see the README for usage details.
If anyone has ideas for helping maintain this repository or the designs themselves, let me know! 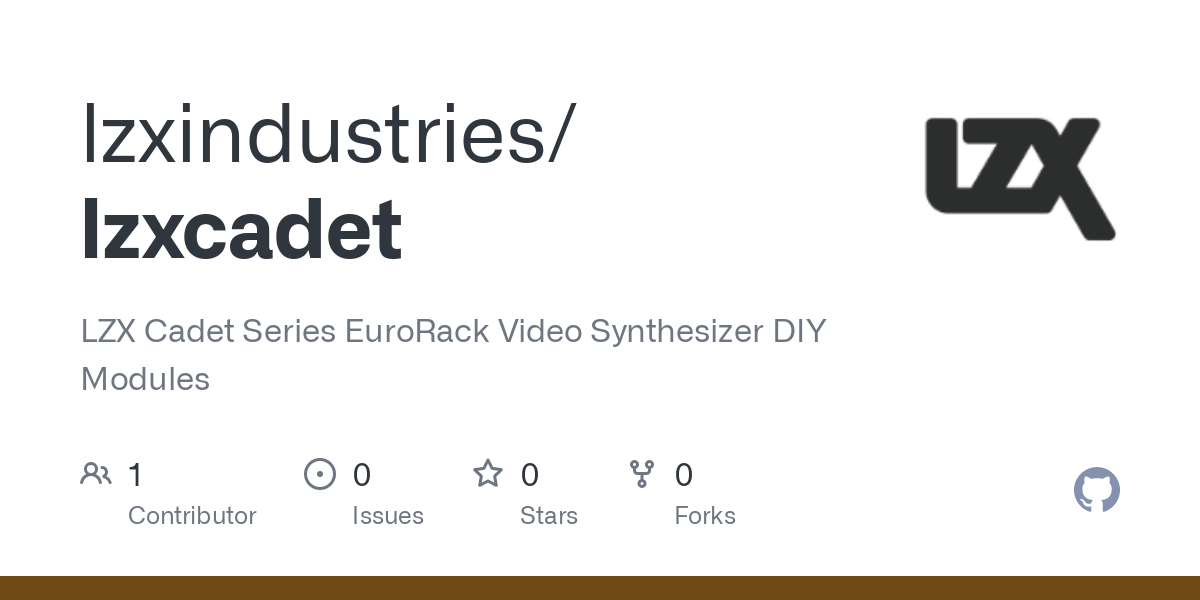 Cool! I’m looking forward to seeing how the C1 code works (even though it looks to be 100% assembler).

Thanks a lot for sharing those! Especially the Cadet Sync Gen source code.

I don’t know much about Assembly either, though I’d be keen on checking if it is possible to modify the code to make it work with a 27MHz VCXO, as the 13.5MHz one is hard to come by. The VCXO I use in my sync gen has the same footprint/pinout and is currently available https://www.digikey.fr/en/products/detail/cts-frequency-controls/357LB3I027M0000/568065

This way, the pcb could be used without having to be modified, then I guess the main limitation would be the maximum number of bits available for the counters in the ATmega88, as doubling the VCXO frequency would mean doubling the counts of each counters. Then it would may be just a matter of using a bigger microcontroller with the same footprint/pinout (168p or 328p).

I might be wrong, but I think you might have to also overclock the microcontroller to use a 27Mhz crystal. I think those atmegas are only supposed to go up to 16 or 20 MHz depending on the mcu (88/168/328). I know nothing about overclocking them, except I think I saw some random blog post once about someone doing it to generate video, so it’s probably possible. Though I wonder if dividing the clock with a fast logic chip before it hits the mcu might also work?

Ah right, overlooked the maximum clock speed of the atmegas, I need to read more about potential overclocking, but this might be an issue for sure.

Else, I think a flip-flop wired as divide by 2 as you described should work, have to check if it doesn’t disturb the genlock since it would be in the PLL/VCXO/microcontroller feedback loop. Then this would ask to modify the board layout, or maybe it could be on a small daughter board with the atmega that would be plugged in the original atmega socket, if height isn’t an issue. At this point and going for a daughter board like this, it may be worth checking if the micro could be replaced by one that would handle 27MHz.

What a treat to wake up this on a Monday! This is such an asset for the video synth community. Long live the cadets!

I might be wrong, but I think you might have to also overclock the microcontroller to use a 27Mhz crystal. I think those atmegas are only supposed to go up to 16 or 20 MHz depending on the mcu (88/168/328).

That’s right – we used a 13.5MHz crystal originally because of the 20MHz limit. The right answer is to transition it to use an RTL based sync generator on CPLD or FPGA.

In terms of design maintenance, Cadet 1 is in the greatest need of an overhaul. It would be best replaced by a module that adopted that approach. @syntonie 's new sync gen/encoder would be a much better place to start.

It would be nice to adapt C1, C4, C9 to use an RCA based sync input/separator as well.

I just do not have time to tackle a revision in parallel with the other projects I’m working on right now, so I offer it up in the hopes others can carry it forward!

I’ve written a handful of programs for the original gameboy in ASM as well as an old sync gen/frame buffer to convert the gameboy’s LCD data to composite. This was ages ago though, so I doubt I have the sources.
The Atmega168 @ 16MHz was powerful enough to set up interrupt routines for producing the sync signals, but I was only able to fully load the frame buffer and output part of a frame horizontally before my sync interrupt triggered the next line. 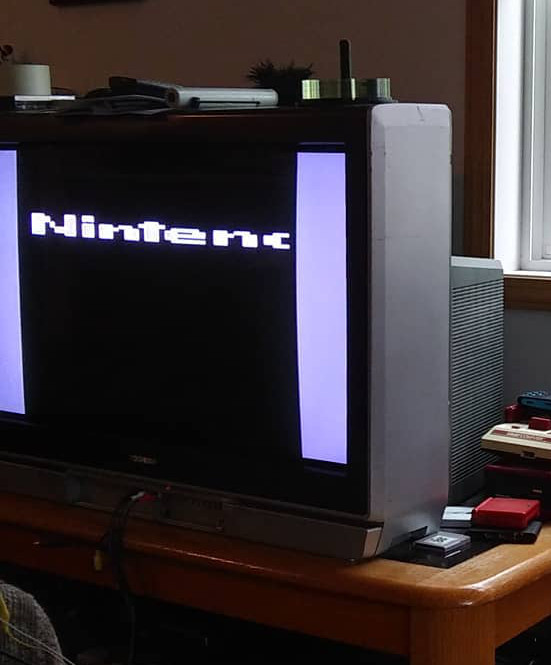 I recall making the decision to port the code to the DSPIC33EV64 for the number of interrupt pins and maximum clock speeds. They were about $12 each at a time I did not have $12 to my name…

Making an RCA-to-14 pin adapter should be pretty straight forward, but so should adapting the C4 and C9 to use the LMH1980.
If anyone has the ability to hand solder SOIC and 0603 parts, I can send you the untested files for an adapter I was experimenting on. It only solves the issue for users who own a C4 or C9. It does not produce the blanking signal. It could possibly help with a few of the expedition [Visionary] modules that have 14-pin sync. I don’t have any to test it on though. 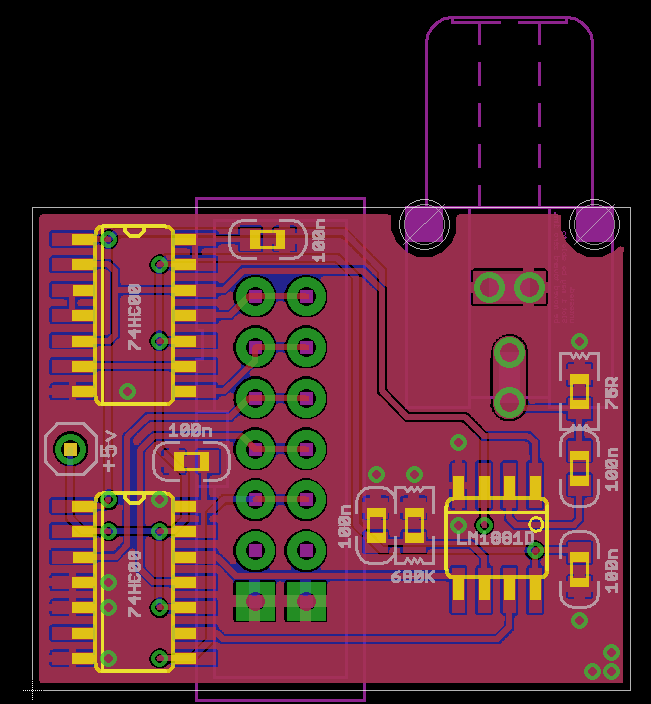 @creatorlars Thank you so much for making these open-source. I’m sure so many folks, including myself, have learned a ton about the fundamentals of video signal generation from the Cadet schematics themselves over the years. Being able to see the board layouts and firmware for the sync generator is huge.

@Fox You know I’m down to test those out.

The only LZX production modules that take 14 pin sync are in the Visionary series. Everything in the Expedition series that requires sync uses RCA except for two early revisions of Prismatic Ray that use H/V power bus sync.

It does not produce the blanking signal. It could possibly help with a few of the expedition [Visionary] modules that have 14-pin sync.

IIRC, the Blanking signal is only required by the Color Video Encoder and possibly the Triple Video Interface modules, as it relates to Visionary series.

I thought so. Can you also verify that no module uses the “Burstgate” pin?

That’s used for the DC restoration trigger, so it may also be used in the Triple Video Interface.
The Visionary Logic modules with internal clocks (like Video Divisions) used a VCXO and CPLD based PLL to regenerate clock from the incoming HSYNC pulse.

Regarding the “do not sell” restriction, would it make sense to allow for selling PCBS/panels at cost to other enthusiasts? I’m asking, because the fabrication houses I’ve used in the past (allpcb et. al.) all have a 5 board minimum per run. I certainly don’t need 5 PCB/panel sets of each module, and it would be a shame for all those extra boards to go into a landfill, rather than the hands of another builder.

Regarding the “do not sell” restriction, would it make sense to allow for selling PCBS/panels at cost to other enthusiasts?

Community organized / nonprofit distro / group buys is fine. Inheriting from the designs to make your own product to sell is fine. The line is crossed whenever there’s an online storefront that’s listed the unmodified boards for sale under the LZX brand name.

Let’s not have a Mutable Instruments fiasco on our hands. The way so many folks misinterpreted Émilie‘s intentions was very disheartening.

The intention, to be explicit, is that this is not a “download and sell it” off the shelf product design. It’s an archive of a discontinued product line, including some modules with issues that would need to be solved before re-entering production. It’s archived specifically for existing Cadet DIYers who want to continue building their systems, and other module makers to use for personal projects, design jump-off points, and for preserving the historical state of the project.

For example – if Foxing Hour or another module maker wanted to put their name on the PCB/panel art, and sell their own renditions of any of these – circuit changed/enhanced or not – No problem. Partaking in our shared legacy and committing to maintaining your own variant of it – that’s awesome.

If a community organizer posted a group buy thread here and served as a one time distributor for a batch of PCBs, and made sure they were compensated for their own labor in making that available and doing the kitting/shipments – No problem.

If someone with an online shop or Etsy store purchased a run of the existing PCB/Frontpanel Gerbers and posts them for sale as “LZX Cadet PCBs” on their website – That would be crossing a line, and we’d ask to have the products removed from the store.

I suppose one gray area I did not cover is, what if you want to buy the PCBs yourself, build them all up, then sell the finished modules? Does this fall under DIY, or is it now retail manufacturing? I think it depends on the venue context – if you’re selling in a forum post, it’s DIY – if you have a reverb/etsy/ebay and a brand name, it’s retail manufacturing.

If it is retail manufacturing, I’d prefer that a variant was designed under a different brand name, so that the builder has taken ownership of that particular variant – they are now responsible for building it properly, understanding how it works, and providing customer support to their customers.

But if you’re selling a few extra builds from your DIY journey or selling off a system you built when you don’t need it anymore, that’s just part of the hobby and not a business, IMO.

Let me know if I’m being obtuse. You are all incredibly respectful of anything I’ve asked for with any of this. More than anything I just want it to feel like the Cadet project is now “community owned.”

I’ve think everything you’ve written in this thread is extremely reasonable & clearly comes after giving the topic a lot of thought & from an important position regarding the creation of the Cadet series. Your latest message clarifies even more & if we, the users here, are being respectful, it’s definitely in part due to your own respectful manner of communication @creatorlars. It’s also been great to see your active participation in recent weeks & months. 2020 & 2021 were tough years for many of us, there’s been a lot of learning that hopefully won’t be forgotten any time soon.

I, for one, will be really happy to see if or when some people can take the Cadet series in more advanced or interesting directions.

Thanks @creatorlars for clarifying! It seems like we’re on the same page here, and it basically boils down to using common sense. Looking forward to giving these a try, the Look Mum No Computer vid on the Cadet series makes it look like a lot of fun.