please can someone specifically show us an example of the result of using at least 3 (or 4) prismatic rays, as opposed to 1 or 2?
thank you, best wishes

Here’s a gimme answer: patch em to red, green, and blue channels of your encoder, then patch them all among themselves! 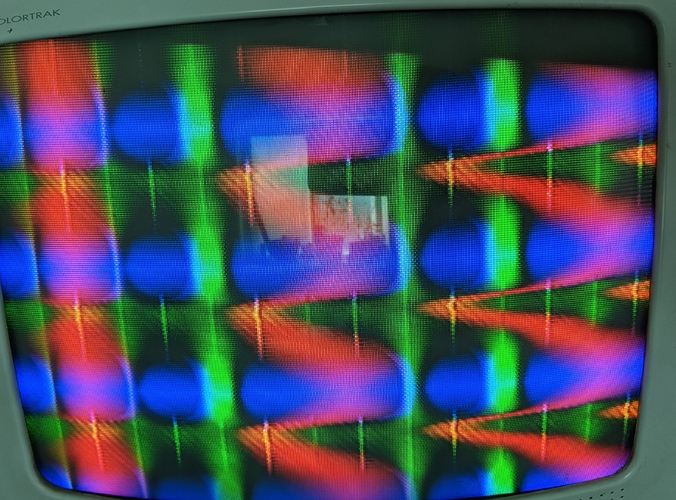 Also, as in audio, phase-synchronized FM synthesis is a crazy universe that will do all kinds of interesting things, but the higher dimensionality of video will tend to mean you can accommodate more oscillators and feedback connections before everything turns to noisy mush.

thanks
I have 2 but i wanted to see what 3 or 4 can do, in comparison
(thinking about ‘how many oscillators do i need’ thread. how far the dimensions/shapes can be pushed)

Two oscillators is a 2D pattern. Four is a 2D pattern with sub-modulation and variations OR two 2D patterns (which can be composited.) I would say even smaller systems can benefit from 4+ oscillators, especially if that’s your primary mode of working.

Doorway and Staircase, when fed ramp waveforms (from Visual Cortex), can also generate patterns in an oscillator-like way, so you could also shoot for a mix of these modules and oscillators.

got tagged by @Robbertunist in the Discord to come show some triple osc stuff in this thread. i use 3 PRs all the time so not gonna necessarily do a big pic dump all at once but whenever i get anything interesting going i’ll post it here (at least until this thread gets archived and replaced by an X3+ DWO3 thread

currently using 3 PRs (and a Pendulum for modulation) in the background texture of this patch. the first PR’s parabola out is fed into the Multiply on the second PR and the Parabola of that one feeds the Multiply on the third PR. the Pendulum’s four outputs go to the Pedestal inputs of the first two PRs and the Frequency inputs on the 2nd and 3rd PR. all PRs are in 4Q mode. one of the PR’s triangle outputs is also fed to the foreground input on the Doorway being used to create the sphere in the foreground to give it its ridged texture.

Thanks for posting & giving me a shoutout @saiteron

Discord - A New Way to Chat with Friends & Communities

Discord is the easiest way to communicate over voice, video, and text. Chat, hang out, and stay close with your friends and communities.