Suggestions for a Video Camera or Source

Does anyone have any suggestions for a budget and/or low cost video camera to provide a live video feed( to a vidiot )? Thanks in advance!

go to a thriftstore and buy a handycam or larger svhs camera . make sure you have (manual) control over light level and focus.
or buy a 2nd hand security camera.

also, get a tripod!

I’ve been wondering if a cheap security camera like this would be a good to use. Does any one have any experiance? 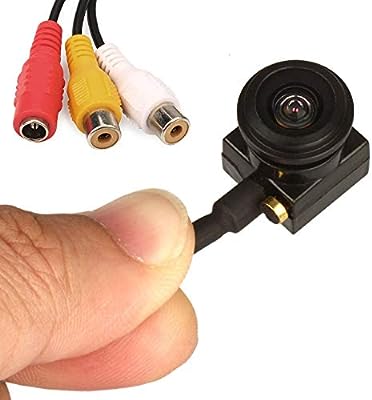 I’ve once made a servo X-Y platform using a very small CCD CMOS camera.
The camera worked, but as it was very cheap, it had automatic light level. that sucks, especially for feedback.

that spycamera looks ok. maybe for some weird experimets it is useful. but note that everything is “auto” so it might crap out on feedback.

I haven’t tried that particular cheap camera, but I have tried others. And, in my experience, you get what you pay for there. In other words: if you want rather dodgy-looking, very-wide-angle video, you’ll be quite happy. Otherwise,…

I’ll second the recommendation on old camcorders. I have a bunch, almost all of which cost me between $0-10 each (the only one that cost a little bit more was an older, tube camcorder).

And, while not nearly as convenient to carry around as something like that surveillance camera, they each produce a much nicer image than cheap “security” cameras like that. They also all have pretty impressive optical zoom (and some have amazing macro), which is extremely handy. Plus the ability to record to tape.

As far as procurement, I’ve found Craigslist a more reliable source than thrift stores. But this will likely vary, depending on location. Just posting on social media that you’re looking for such a thing can yield results from friends too. Once people know you’re willing to take what they view as “e-waste,” sometimes the floodgates open. (I realize I should add that it helps if you’re a bit on the older side here; younger people than I maybe don’t have friends with gear from the 90s sitting around.)

that is my experience too.
and tube camera’s work wonders on feedback loops.
they are large and heavy, but they are are worth the hassle!

Integrating a camera with your LZX gear can be daunting at first. This guide lays out your options and is chalk-full of pros, cons, and gotcha's.

And the Visionary Sync Generator and Triple Video Interface

With the Visionary series, the condition is having the time and patience to wait for a discontinued module to be sold and you being fast enough to buy it before anyone else.

While these conditions may be true for some of us, they’re obviously not true for everyone. This may be obvious to us, but not so to everyone else. So I think its misleading (to some readers) to not mention an important qualifying condition.

@nerdware I don’t see this as recommendations, the section in the quip that is being referred to mentions: “…LZX gear with a video input to get video into your system.” for the sake of completeness Cadets and Visionaries would be included (as is the Visionary CTBC).

As far as qualifying conditions go, the TBCII isn’t available either

I’m not saying they shouldn’t be included, mentioned or recommended. They certainly should be, but with a qualifier.

There are many cctv cameras out there that have gen-lock inputs and rgb and y/c outs. This is a huge advantage as you do not need an input module. If it is synced you can patch in anywhere in the system.

I some time use this king of fpv cam, big fish eye, for feedback it provide a round shape with expansion on center picture and compression on the egdes. I prefer this one for OSD with manual setup exp/white bal… https://www.cdiscount.com/photo-numerique/camescopes/700tvl-hd-mini-camera-1-3-sony-ccd-effio-e-osd-men/f-1128602-auc6922722172435.html

i updated the “Getting Video into LZX gear” section on that Quip doc - although i’m not yet 100% it is clear of inaccuracies.

Thanks for the feedback!

A small pedantic point: some of us use PAL.

I’ve read your guide and I’ve been looking at camcorders and I was looking at a Panasonic HC-V180K in particular and I seen that it appears to have a 3.5mm A/V port. Does that output composite? Would this be compatible with the Vidiot if you hook up an 3.5 to RCA and a RCA to Component cable? I’m completely new to the video side of electronics so I don’t know if there’s a reason this wouldn’t work because your guide said a video mixer or some go between would be necessary to use with the LZX systems.

Vidiot is composite in (not component), so you’ll just need the correct 3.5mm to RCA composite cable. It looks like it sends stereo audio out, so you’ll probably need the 3.5mm side to be TRRS.

Awesome, thanks for the reply. And duh on my part about the composite, waiting for the Vidiot to be shipped so I don’t have my hands on it and it had been a bit since I looked over the manual.