Hi!
Just wanted to share an idea. It’s basically 3xCadet VI faders smashed together with Slider Potentiometers and Normaled inputs. I’d like to be able to crossfade between two 2RGB signals.
I don’t expect anybody to go through the schematics (it’s the first time I draw one, and its a bit chaotic).
But I would appreciate any tips on sandwiching? It’s probably going to be a 10HP sandwich design with smt components DIY friendly.
I’ll try to order a test pcb over christmas and start the new year with this new exciting project 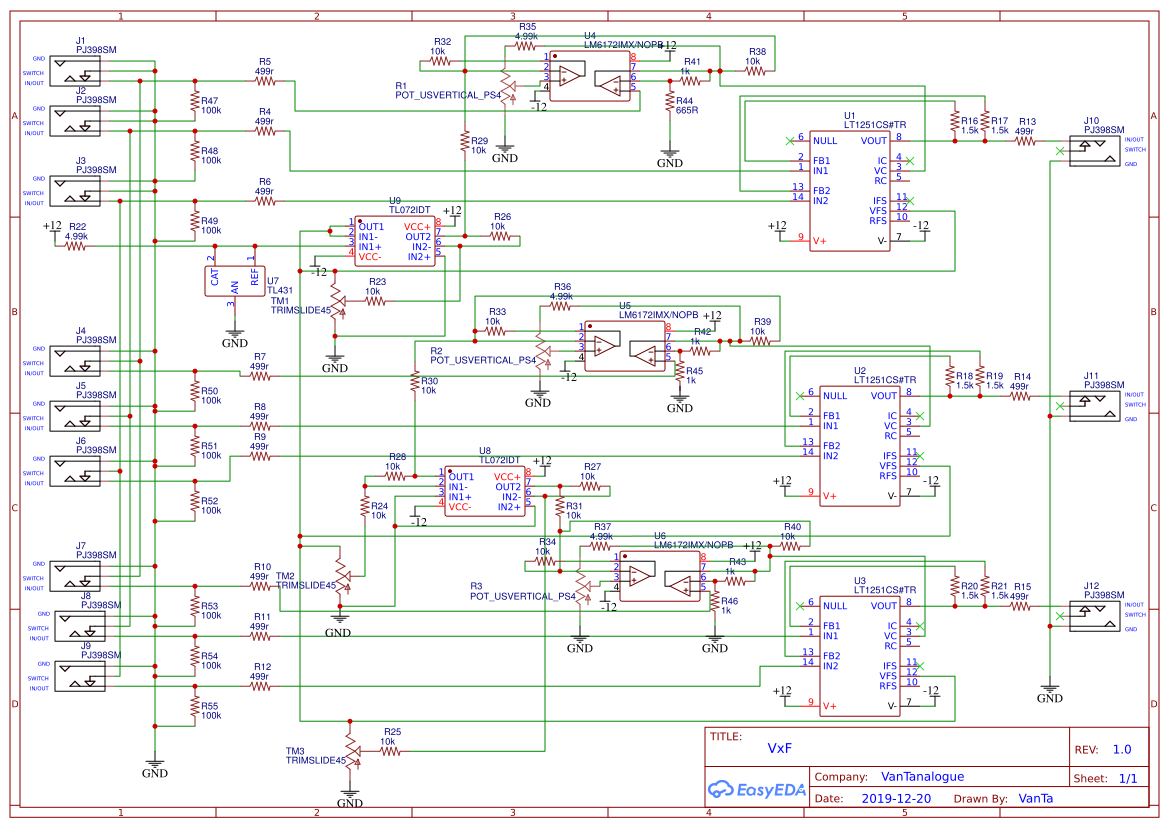 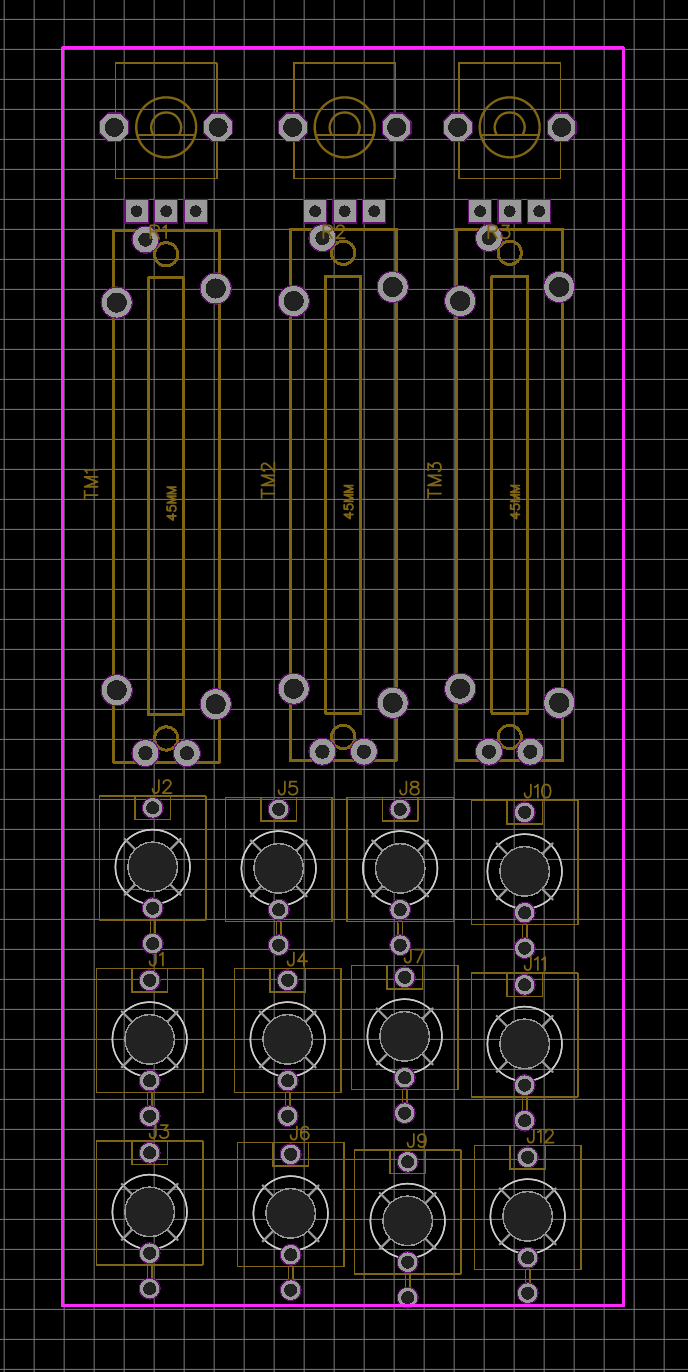 did you add capacitors around the powerheader (10uF electrolythics) and 100nF capacitors next to the IC’s? I don’t see them on the schematic. Look at Cadet schematics for examples on this.

True! the power section is not there yet. Thanks!

Nice!! I want one… my recommendation make the INPUT normalizations cascade (similar to Passage) that will be the most flexible o all combinations :), including both A/B inputs and CV. Also dont be afraid of doing it SMD 0805 is big enough and ICs are ez to solder even the inexperienced.

I use my current 3x Faders for this task and this layout looks ideal. Agree with normalizing inputs, it makes patching way less messy. Hope you can turn this into a DIY project for the community!

Cool, thanks!
Normalized inputs are already in the schematics, I think that part is correct.
Should I buffer the first inputs because of the cascading? Or is it ok like in the original cadet circuit?
The idea of this project is threefold: give back something to the community, enrich the video DIY universe and learn the process of creating a module. That’s why I chose this ‘easy’ design. I have more ideas, but let’s test this one first.

What about adding a flipflop to each fader? So you can switch A<=>B with triggers for animation…

I would LOVE to have a fader with either some flipflops or a simple AD. Thats basically a LZX Pendulum but with triggers input.

Thats very interesting.
An analog switch would do the trick, maybe this: https://www.maximintegrated.com/en/products/analog/analog-switches-multiplexers/MAX4760.html
Didn’t really check the bandwidth and other specs, but some chip in that direction.
That will change the layout, though. I didn’t want to go bigger than 8hp…
But if the analog switch is fast enough, it could even work as a threshold.

I’d be interested in one of these. It looks really handy.

This looks super cool. I would be interested as well if you did a run of them.

How is your cross fader project coming along? I never read the thread until now but this sounds great. If this worked, could you please share some photos of its visual output & also the finished model & PCB. I’m really curious

note on board connectors:
I have done a few experiments with pin headers. For bigger pcb’s: if you use (for example) 2x 1x6 headers on both sides of the ‘main’ pcb and a 2x4 on top / bottom, it makes a firm connection (so you don’t need any standoffs and screws to keep it all in place)

Ah, now that you’ve written that I realise that I’ve seen standoffs used on bigger modules or on smaller modules where a single one is used because there’s very little header connections.

Funny that you say about pin headers, I’m planning to use them but in a funny way, more to come

The project is coming slowly forward, I don’t have much time to put into it sadly. And I’m also not proficient with KiCad yet.
There’s 3 modules on the drawing right now, focused on live performance.

I have plenty of time to help when I’m at work, but I use Eagle.

I’m really curious now, headers make perfect jumpers & using them with jumper cables for patching is a great idea when space is absolutely critical. So are you creating a 4x4 or 8x4 header matrix on a front panel?

On the subject of cross-fader modules: I will be offering a PCB/panel set for DIY builders soon, which provides three channel (RGB) cross-fader/keyer functionality between two sets of RGB inputs. I’ll write more soon, but if you’re interested or have questions now then please feel free to PM me!

Wouldn’t this be better on its own thread?
I’m interested and have a number of questions about it, but I wouldn’t want to confuse anybody that is following the VxF vantalogue RGB crossfader project.

Sorry, yes, this was rude of me - I have cut my post back. Sometimes I start typing and get carried away