wait, this one is the one I meant:
I’ve ordered this one a few times already, in packs of 100 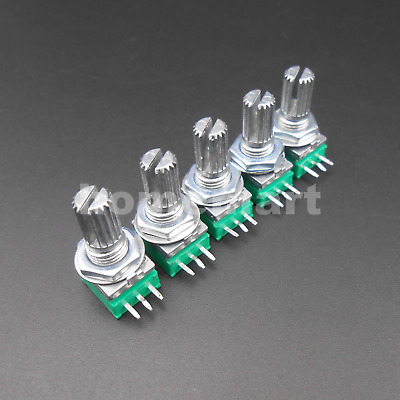 Model: RK097N. (Choose what you need). We will be responsible for you.

Can anyone specify the bandwidth requirement that makes the LM6172 the only possible op amp? I understand that slow op amps within the video path will blur or muddy the picture, correct?
Mouser lists the LM6172 as having a GBP of 70MHz. The next opamp down in speed and cost is the NJM2068D with a GBP of 27MHz. This sounds like a big drop in bandwidth but I at the same time, 70MHz sounds like massive overkill when a colorburst signal is only 3.58- or 4.43MHz.

Correct me if I am looking at the wrong spec.

the slew rate is also important

I haven’t used that chip before but the slew rates on the datasheets for both chips look significantly different (6V/µs vs. 3000V/µs on the LM6172).

You could pretty easily compare them if you just breadboard a buffer circuit like this (remember 100nf bypass caps on V+/V-) and feed it signals with hard edges like a keyed shape or hi frequency square wave oscillators. It should be readily apparent on the output if the NJM2068D isn’t slewing quick enough.

The 1k resistors on the op amps are suggested in the LM6172’s datasheet for buffers. Not certain if that’s required for the NJM2068D or if you can get away with a wire link like in a TL07x buffer circuit. Let us know what you find out if you try this! 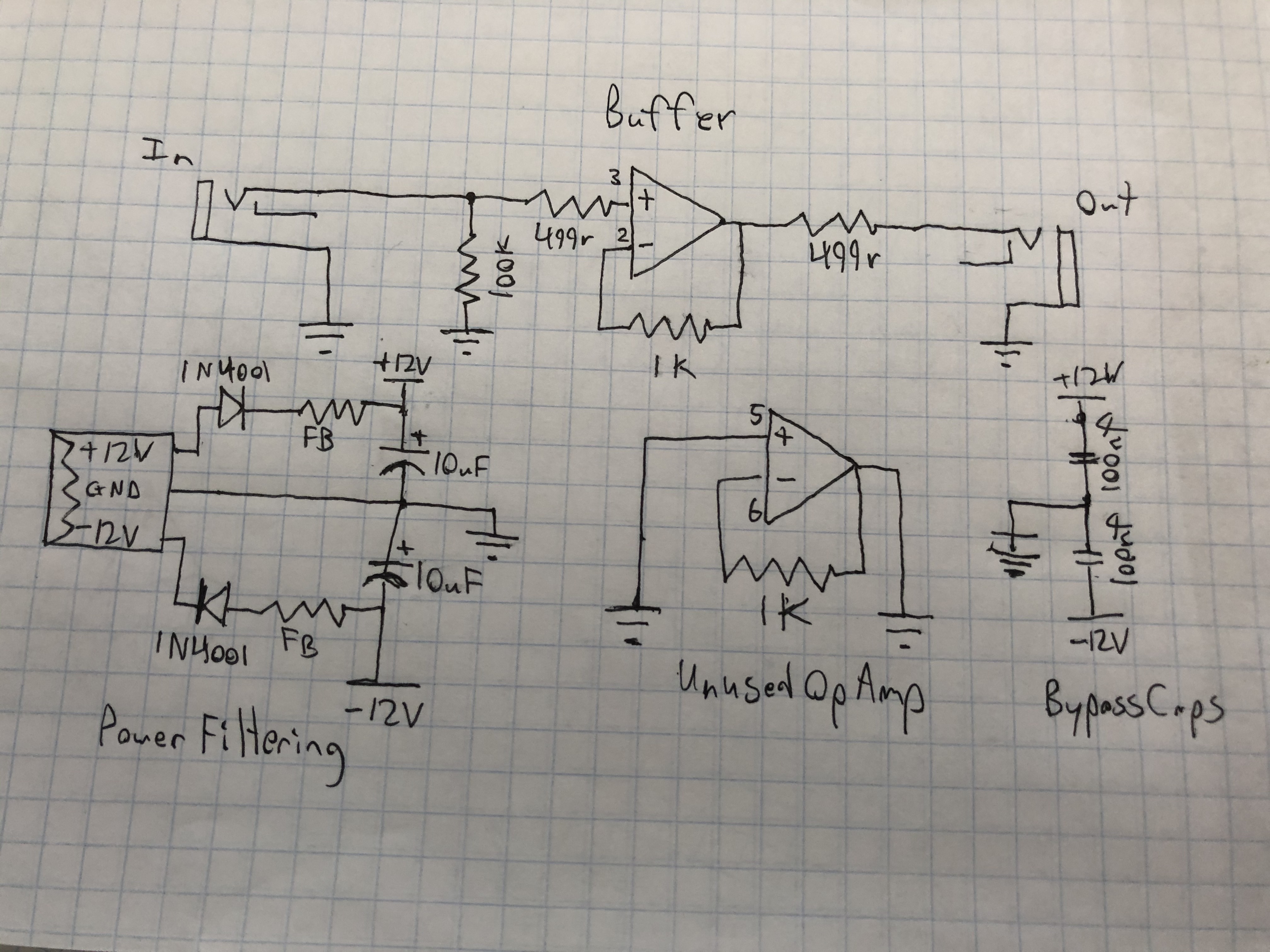 Can anyone specify the bandwidth requirement that makes the LM6172 the only possible op amp?

It’s not the only possible opamp to use for video stuff. There are many fast opamps that will work, but it’s the one that LZX chose for their DIY designs. You may be able to use other opamps but they probably wouldn’t be a drop-in replacement into the existing Cadet boards.

I can’t speak for LZX, but if I had to guess why they chose it for the Cadet stuff, it’s probably because:

Probably some other reasons too… maybe involving offsets or something else I can’t quite remember? The pinouts and the DIP packages especially mean that they’re easy for people to experiment on their own with and design new things, which I believe is something LZX wanted the Cadets designs to help with. And I know we don’t really think of them as cheap, but when you compare them to other video-rate opamps, they’re towards the lower (or lower-middle) end of the price spectrum (or at least they were when I looked a couple of years ago).

And the reason for the LM6172’s in the Castle line are probably all the same reasons as for the Cadet line, plus the fact that they were already used in the Cadet line (since Castle came later).

Here are the standards:

[WORK IN PROGRESS, FEEDBACK IN THREAD WELCOMED] LZX Industries Patchable Video Standard V1.0 The Patchable Video Standard proposes an electrical and interface specification for wide bandwidth analog computing instruments intended for creative and expressive applications. It is optimized for, but not limited to: (1) generating and processing analog RGB video graphics in SD resolutions, (2) affordable devices which are accessible to working artists and not just big studios, and (3) maximum patcha…

Slew rate is what you should care about when evaluating an op-amp. You want to look at the time it takes to go from 0V (black) to 1V (white). That time should be less than or close to 1x SD pixel (about 70 ns.)

LM6172 is getting more and more expensive since TI bought out National. But there aren’t any real alternatives with the same specs, price, available in DIP, and that can run on +/-12V power rails. We’re moving to SMT for our next rendition of DIY designs, and using the same opamps we use for production (ADA4851-x series, running on +/-5V power rails.)

Thanks for the replies, everyone.
The 70ns spec is essentially what I was after. I was able to find cheaper op amps with comparable slew rates but like Lars pointed out, the packages are different and most notably the max power supply ratings are lower.

Also much appreciated that no one has yet to speak down to me. What a refreshing community you have here.

I notice that Rochester Electronics has a stock of the obsolete, not lead-free version of the LM6172IN for less than half the cost of the NOPB version.

Though the minimum qty is 120. (Another group buy?)

Yeah, you can get neat unintended effects with narrower bandwidth parts. Often it appears to be horizontal smearing or other filtering effects but you might get surprised. I usually stray away from IC sockets for video modules but you could try that on one of your builds to make comparisons easier. Breadboarding that buffer circuit and passing thru signals that sharply change from B<->W is probably the more direct way to roughly evaluate the difference. Breadboards will introduce some stray capacitance just like IC sockets.

Do you need a chunk of them atm? The difference for the 500 and 1000+ tier seems kind of negligible. I’d be down to split a 120 pcs order with someone in the US but don’t have bandwidth to arrange a huge group buy sendout.

Sean, you’re a legend! Thank you so much for this!
Given I’m in Australia there’s not really any point in me sharing a group buy with you guys so I’ve just done my own order.
Now I just have to build up 120 x LM6172’s worth of video modules

OH no, what a disaster!

Good find! Put me down for 30-50. Maybe more. How many did you need? If we can get a group buy set up this week, that would be fantastic.

Sorry, probably worded that wrong… I should have said, “Perhaps those that need some could arrange another group buy?”

Myself, I’m actually still working my way through my stock from the last group purchase.

But, yeah, I’d imagine getting a few people together to reach the 120 minimum shouldn’t be tough.

Given I’m in Australia there’s not really any point in me sharing a group buy with you guys so I’ve just done my own order.

Let us know how the visuals look when using those 6v/us opamps or post a link to some video, I’m curious.

Anyone in Europe up for splitting an order? I’m in Berlin & would take about 50.

Just to close the loop on this, Rik & I are now in touch 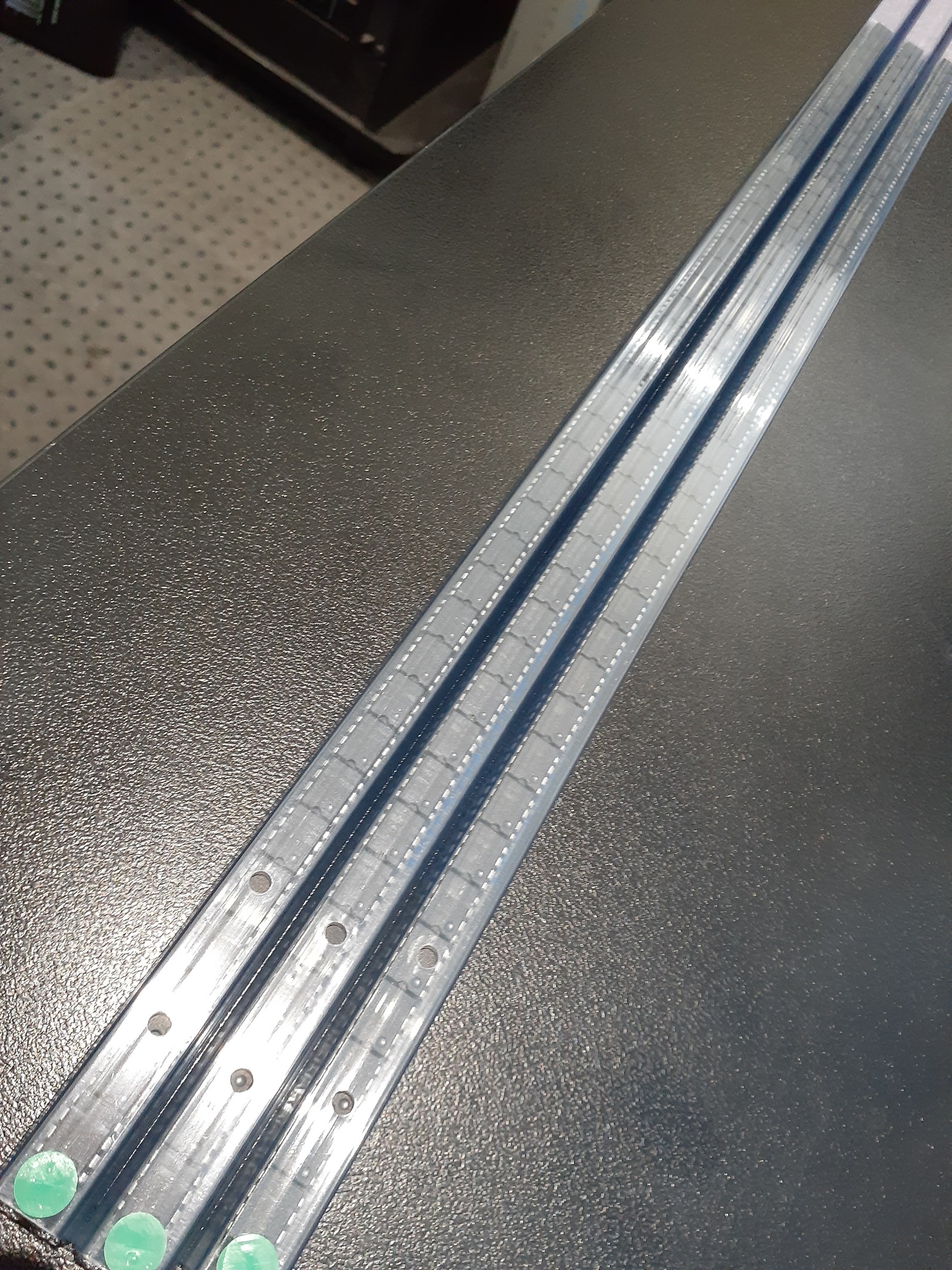 Can I replace the 1623934-1 0 ohm ceramic resister in Cadet I Sync Gen with this ZOR-25-T-52-0R 0 ohm metal film resister? Or also can I just use an extra leg off another component since its 0 ohm anyway? The 1623934-1 is only available in 4000s on Mouser and i don’t want to pay extra shipping to get it from Digi-key or something as I’m not ordering anything else from there.