I just came across the Omiindustriies quad-mute. I don’t know about anybody else, but I’m would really like to be able to mute every input on the SMX3. I guess the obvious answer would be a module (or 3) like the quad-mute. It does just that - in out jacks with a switch. But this would require a patch to use twice as many patch cords.

I’m guessing it would probably void the warrantee but it wouldn’t be too hard to solder 9 wires to the inputs. Then to 9 switches to connect to ground. Would this blow up the output of whatever device I’m connecting to? I think the LZX signal has some fault tolerance?

I’m all about creating performance interfaces but I’m curious–are you having issues with the center detent pots not muting the inputs?

No, the pots work well. I love the detents and want a retrofit for the visual cortex.

Since I’m calling them mutes, I guess I’m thinking of it in an audio recording sense. Make one channel good, turn it off and move to the next one.

I want to set up input one, mute it, set up input two… and then unmute them all. More of a setup tool than a performance tool I guess. (I haven’t actually done any performances so…)

ESG3 Encoder has mutes for each color channel – so if you put SMX3 + ESG3 back to back, the ESG3 switches will become enable/mute/invert controls for each row on SMX3.

I’m not going to encourage anyone to do this since this is a $400 module. This kind of modification seems very much like it would void a warranty and something you’d have to declare if you ever sell it on.

However, if you’re feeling adventurous–inputs on LZX modules always go into op amp buffers. Pulling the tip pin of an input jack to ground through a switch will just pull the buffer’s output to ground. Anything that is passively connected or multed, including the switch pins of the G/B inputs when they’re unpatched, will also be pulled to ground.

Try it on one jack first to be sure. It may actually be less expensive to drill blank panels, install switches/jacks to make some cheap passive switches and just be very tidy about your patch cable management.

Yeah, I think what I want can be done with switches just on the red inputs. Maybe a solution like the quad-mute may work. I know I have some switches and some 3.5mm plugs (I don’t think I have any jacks). But I can kluge something together to test it out.

Shorting your inputs at the SMX3 is certainly an option, but now your upstream device’s output is driving at full load capacity - a potentially hazardous situation for whatever you have connected.

Having recently torn down my own SMX3, I think we can do better.

Overview:
The 9 front panel pots provide a control signal by which each video input is multiplied. Here is a rough outline of how voltage control is configured in this respect. 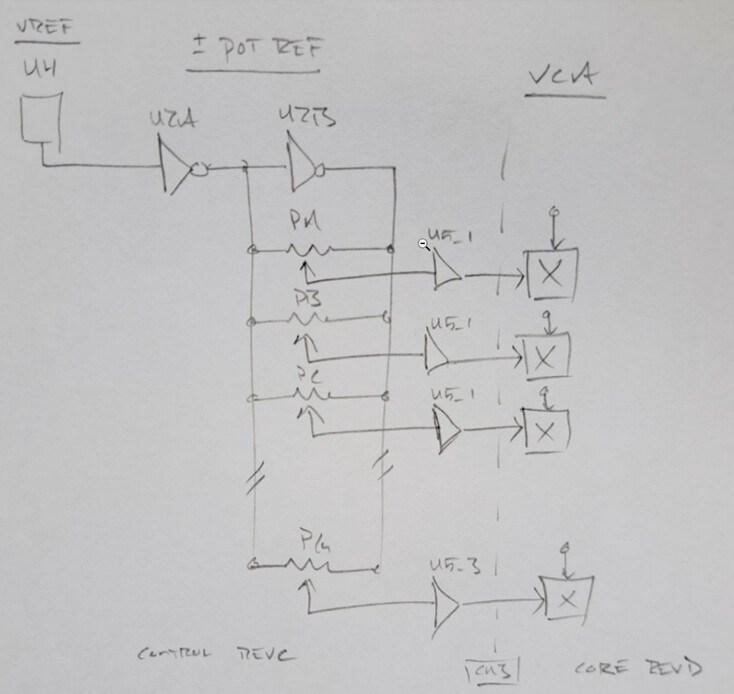 A reference voltage is generated at U4, buffered and inverted by U2, then supplied to either end of the control pots. The center tap is then buffered and passed onto the one of two multiplier inputs: Each control stage is identical.

Looking closer at the interface between stages, our control voltage passes through a voltage follower into an inverting full wave rectifier and then onward to VCA town. 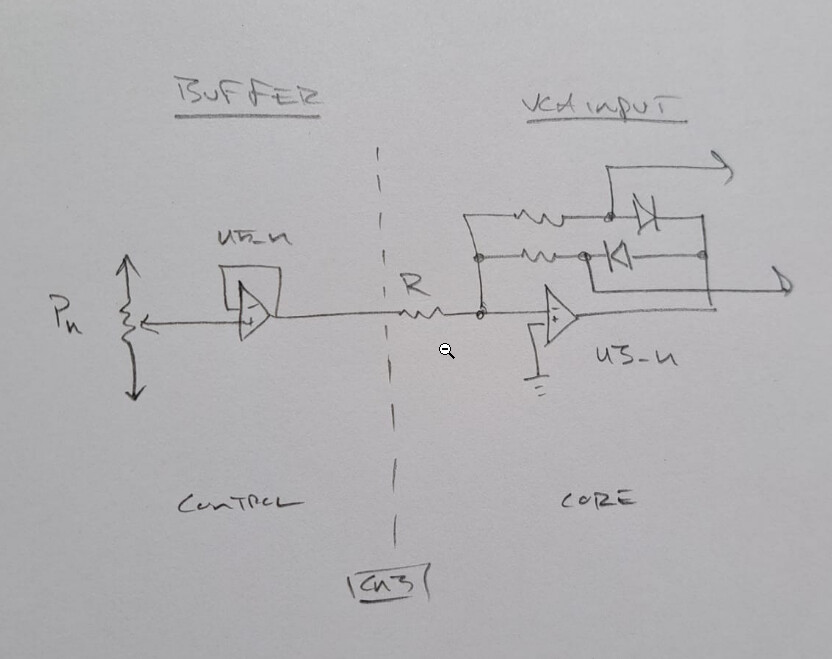 Proposal:
Instead, employ an analog switch or tri-state whatever to short the input of the rectifier. 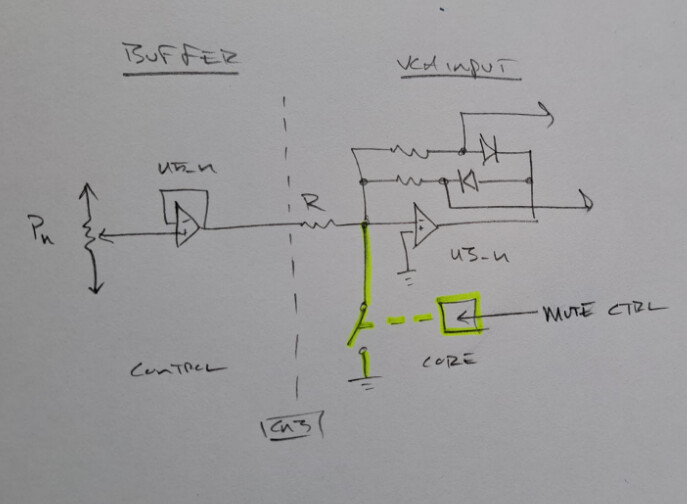 Implementation:
Inputs are located atop resistor arrays R28, R30, and R74 pins 2-4 on the core board. Wonderfully available right at the back. 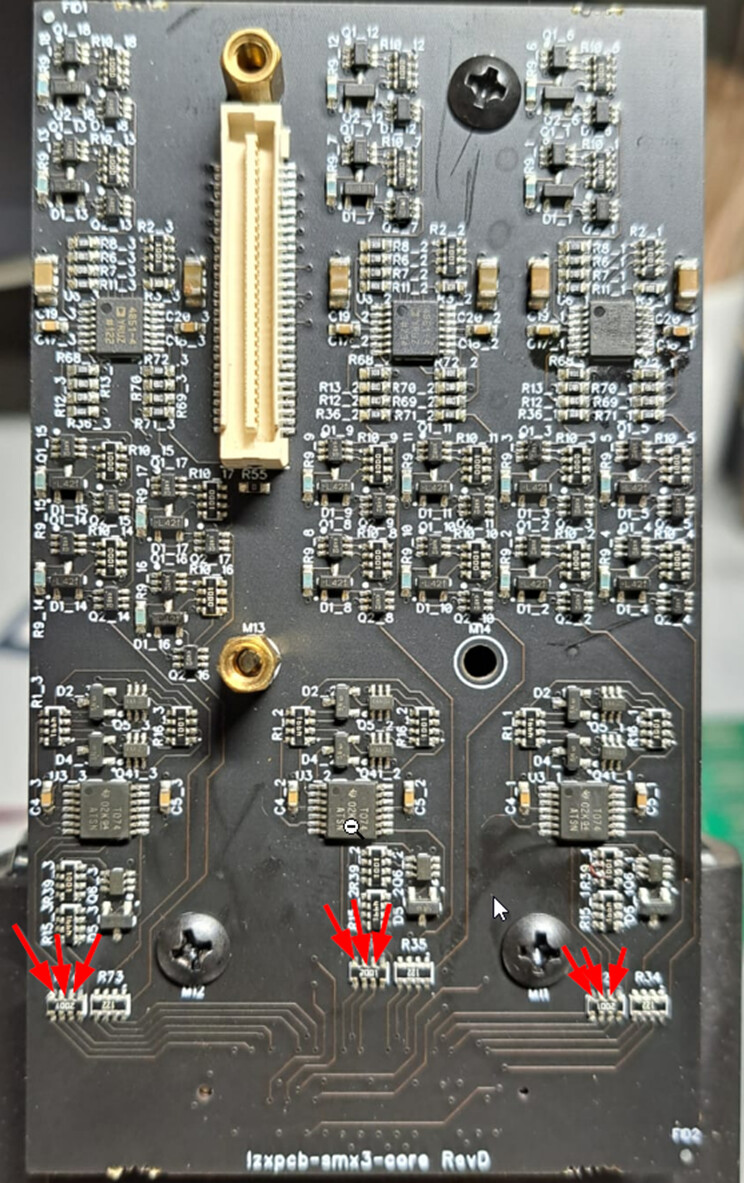 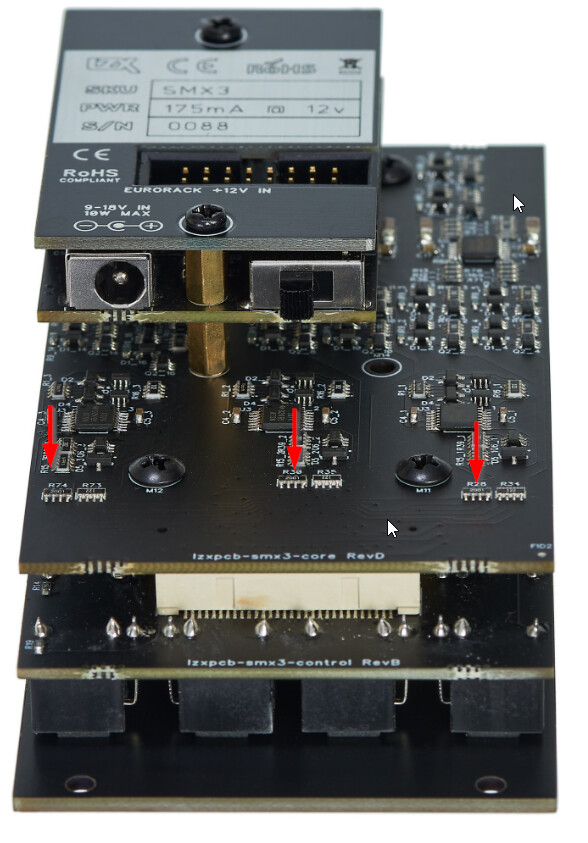 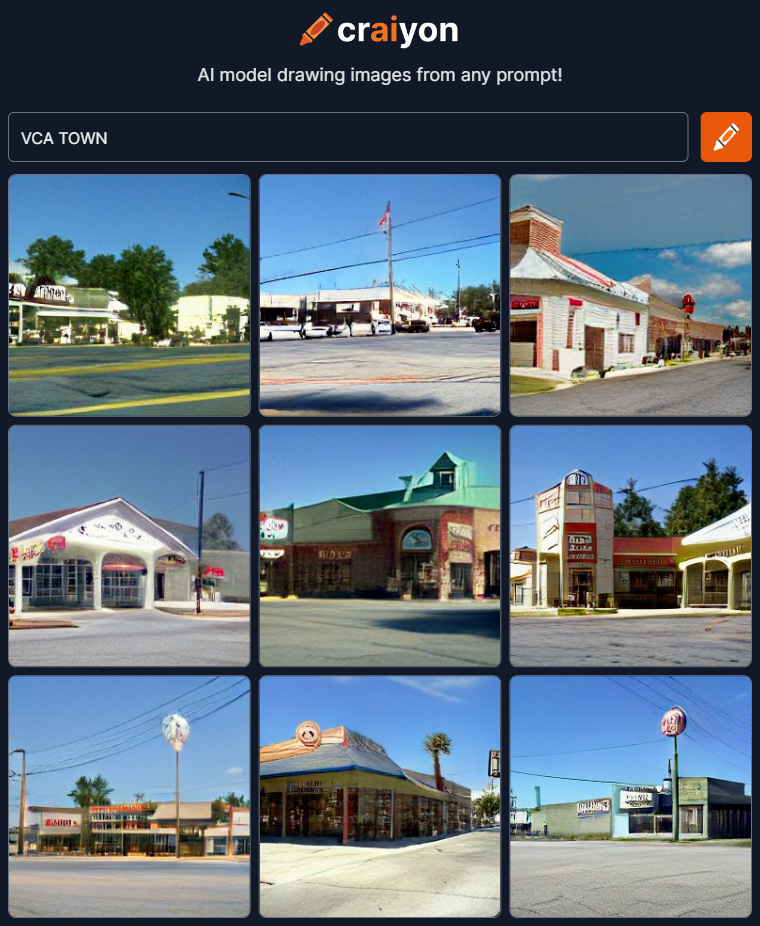 Well, the only comment I can make is wow! That’s some work right there!

Alas, my meatball soldering skills would allow me to hit a target the size of a 3.5mm jack’s solder pad. My dexterity when it comes to surface mount sizes… sadly lacking.

I do have a bunch of jacks and switches - I’ll make my own quad-mute - actually the switches are dpdt so I could do some fancy dual input dual output reversing inputs or something crazy.

That being said, working with SMD is mostly a matter of tooling and process. Some tweezers, magnification, and a small iron tip will get you pretty far down the road!

I seem to recall hearing diamond cutters can’t drink alcohol -it makes your hands shake. I’ll never cut diamonds and never (successfully) solder surface mount. Neither tweezers nor a magnifier will help that.

I tried building a kit that had components spaced out for beginners - nothing too close to each other. I managed to mess up half the traces trying to get all legs soldered. Not a pleasant experience. Thing didn’t work when finished.

You want XLR cables? I’ll solder as many as you like. Surface mount and I just don’t get along. 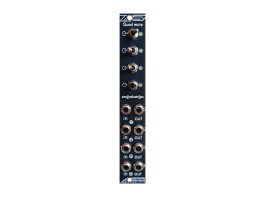 Every Eurorack system benefits from performability, and the omiindustiriies Quad Mute is one example of a stellar way to add tactility to your rig.