A shame you fried the JTAG tool

This is probably the 3rd or 4th time I’ve done it in the past few years! I usually have a backup. Not this time. I can develop without the debugger tool, but it involves building the firmware binary, transferring it over on SD card, and booting from SD every time I want to test a build. So it’s harder to do the more tedious bits that involve small tweaks you want to verify rapidly.

The current development path for Memory Palace is to develop the Mk2 firmware with a build that is cross-compatible with the Mk1 hardware (but SD modes only.) So I’m sure we will add this feature to Memory Palace Mk1, but that will come in parallel with Mk2’s development.

What camera is this, Lars? I’ve seen them around but never known what they are

Does this mean the eventual mk2 memory palace will do the HD timings?

What camera is this, Lars? I’ve seen them around but never known what they are

Does this mean the eventual mk2 memory palace will do the HD timings?

Yes, part of the whole hassle of this generational upgrade going on is that all future development will support all 15 analog SD/HD timing formats. This is our “forever list” of video formats to support. So Mempal Mk2 will support all the same timings.

ffs… this means I’m going to end up having separate SD and HD racks. While MP’s functions are only accessible in SD, I’m happy to stay in SD. I won’t be able to resist an HD Mempal, but I’m too much of a horder to let go of the SD Mempal.

I’ve got a Vessel in the back of a wardrobe. A MP2 might finally push me to transfer all my SD syncing units into the Vessel, find a Vesa arm for it and mount it somewhere alongside a HD + everything else version of my existing set up. The quest for a good load-bearing and easily adjustable Vesa arm commences…

So whats up with the chromagnon? Whats the actual Status and are there any news?

After the TBC2 firmware is released, I’ll be able to resume work on Chromagnon. We are a very small team, and have to serialize our efforts. The reason we’re releasing new modules right now is so that we can survive as a business to finish the Chromagnon project, which has suffered long delays for more than a few reasons! We discontinued most of our product line when Chromagnon was announced, so it left us without a product catalog to survive on when the delays hit us. I’m looking forward to celebrating the TBC2 launch and being back on the Chromagnon track.

I did manage to squeeze an easter egg mode into ESG3, because we had one position left on the 4-bit format select switch, it is 240p60 (262 lines/field NTSC progressive) – it should be a fun one to play with on some older CRTs. Currently my display will recognize it as NTSC on composite, but not on it’s YPbPr inputs.

I got this to work on a Tektronix 650HR-C in RGB mode! My rescan setup won’t do it justice it at the moment but the scanlines look great in shape synthesis.

Can the manual be amended to show this timing is possible?

EDIT: Here’s a halfway decent rescan and a rougher closeup so you can see both the aperture grill and blanked scanlines more or less more clearly. Those edges, though. 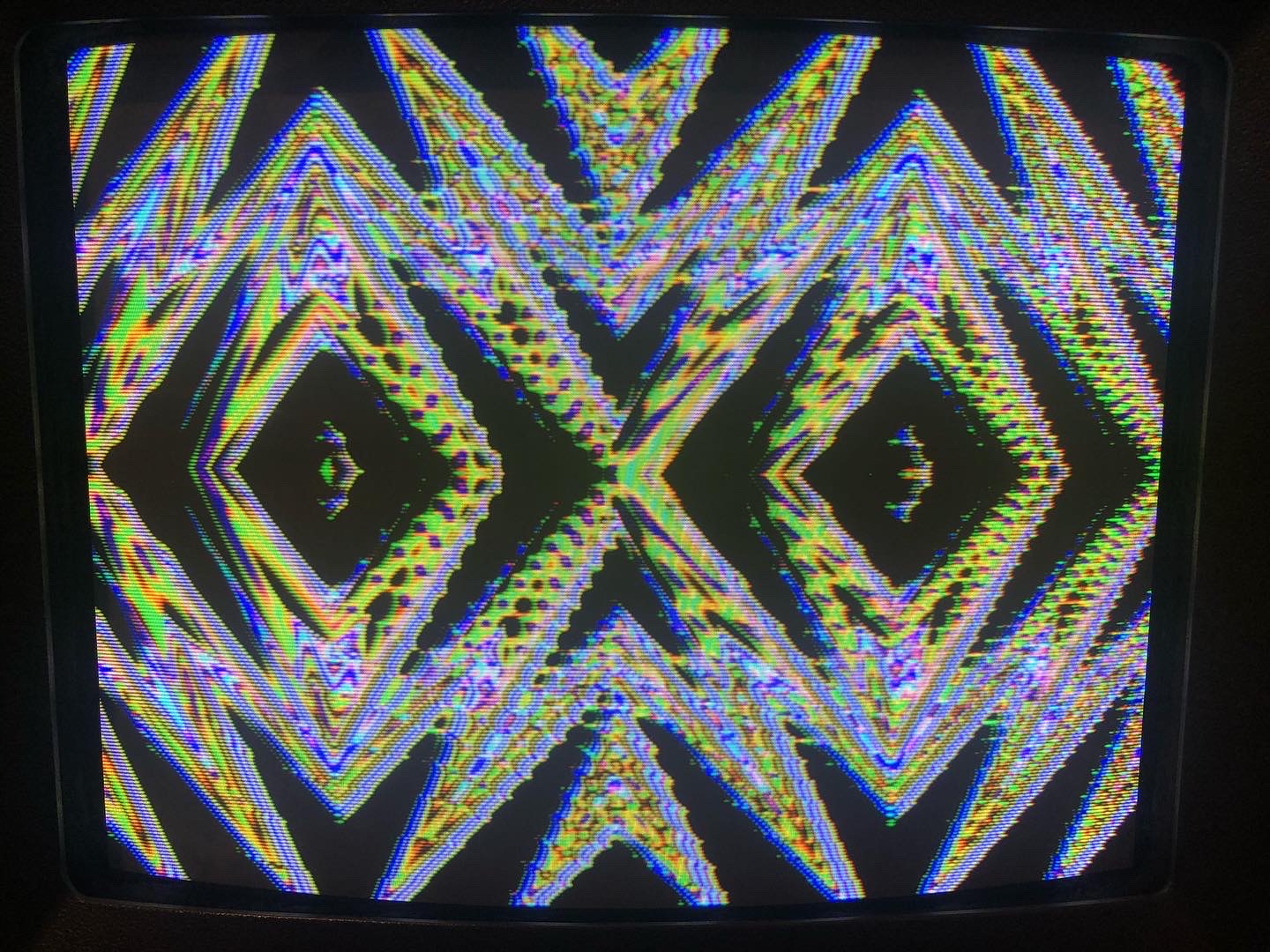 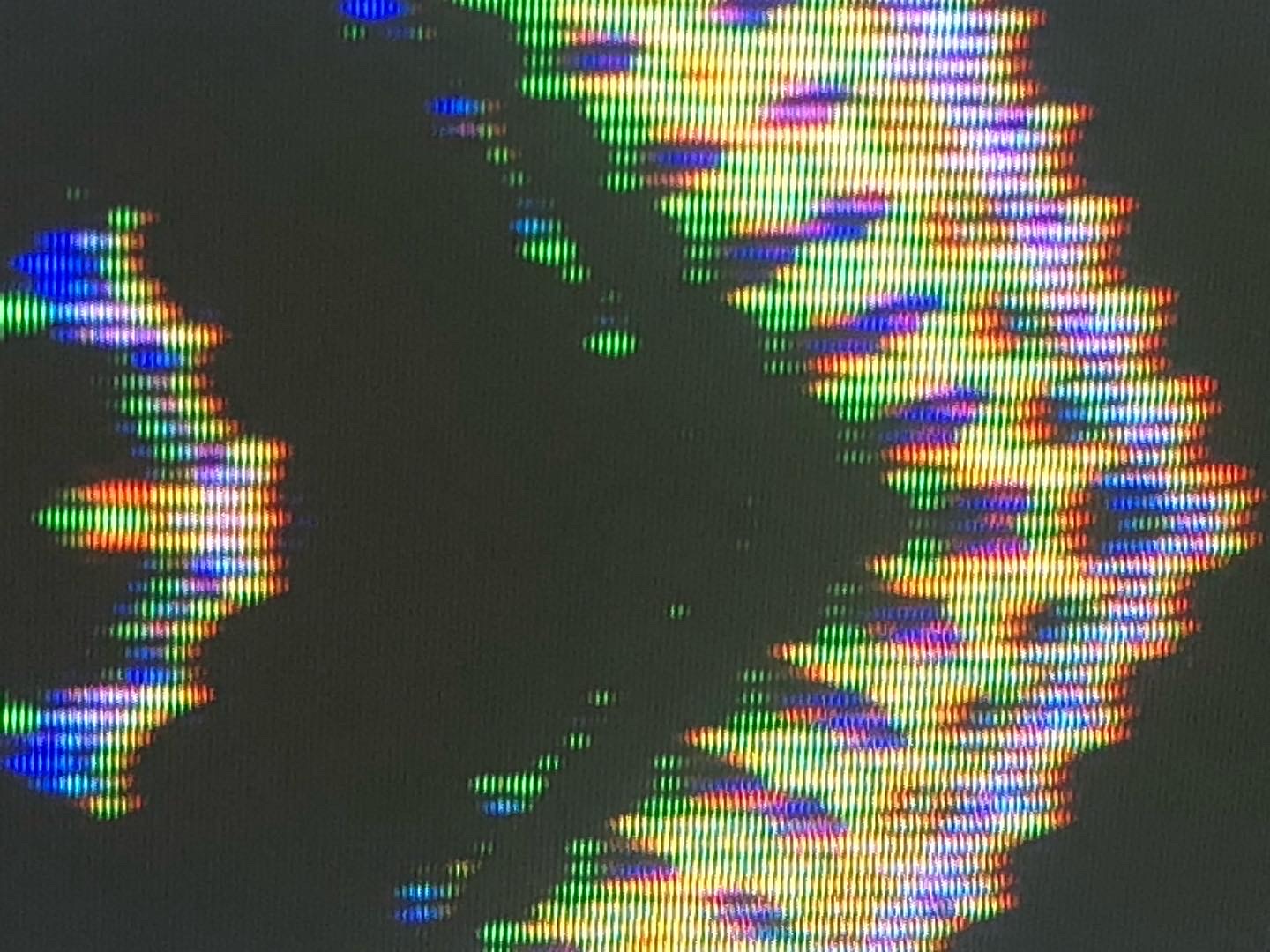 Reminds me of when Apple killed FCP 7… glad we have modules available again now and LZX is still here.

This might have been asked already…but with TBC2, VC, Memory Palace, etc. is there a preferred Sync Master? I typically use the VC as master. Just wondering if TBC2 should be master in a setup with those modules or doesn’t matter keeping VC as master and TBC2 slaved too.

Not sure but one thing to bear in mind is that the component in on VC is not a TBC/FS so if bringing in multiple external sources is part of your workflow not having VC as LZX house Sync (master/parent) might make using that input more challenging.

This might have been asked already…but with TBC2, VC, Memory Palace, etc. is there a preferred Sync Master? I typically use the VC as master. Just wondering if TBC2 should be master in a setup with those modules or doesn’t matter keeping VC as master and TBC2 slaved too.

All the Gen3 modules (including TBC2, Chromagnon, ESG3) with sync generator functions are crystal clocked sync generators with external sync capability. (So technically they are all time base correctors, but not all frame synchronizers!)

So there’s no advantage or disadvantage to which one you use as sync master. It’s just whichever module doesn’t have anything patched to the sync input jack.

There’s also no problems with continuing to use Visual Cortex as your sync generator either – it’s a very stable sync gen, with a similar architecture as Gen3 (a dedicated FPGA/CPLD generator running off a base 27MHz VCXO).

I would avoid using Memory Palace as sync generator – the earlier units had some issues, that were then corrected. But it doesn’t have as ideal of a sync transmission line as the Gen3 modules do.

(So technically they are all time base correctors, but not all frame synchronizers!)