@eurostar You can do this using pretty much the same patch as the one illustrated here:

Hello everyone, i wonder if anyone would be so kind as to chime in with some words for the leyman!
I am entirely ignorant about video synthesis, but it’s always fascinated me and I have some questions if anyone cares to answer, please?

When i was a kid in the 70’s I saw what i think was an EMS Spectre/Spectron Video Synth.
The spec of this is:-

This was 1974 technology of course, but i wonder what the equivelent setup would be now (I suspect control pin matrix is not necessary, perhaps some modules have been superceded)?

Also, any comments about that machine/spec would be very interesting.

I’ve been looking at the Vidiot with great interest but it’s useful to consider/learn about alternative/deeper setups too.

Please can somebody explain the basic differences/principles/focus of the individual LZX lines, i.e. Cadet, Castle, Expedition, Orion. Would help me learn a bit more…

Thanks for your time and help and best

I don’t know anything about the EMS device you mentioned, but as to the different LZX lines, I think I can give my interpretation…

That’s just how I differentiate the series in my mind. Lars and others probably have other ways of describing them. My Castle description should probably be better… Just calling it “digital video synthesis/processing” might be technically true in a way, but it’s not what one usually thinks of as digital video. Digital video usually involves things like bitstreams and color depth and frames and compression and many other things like that, but with Castle, it’s all very open and any part can take analog signals in or use the digital outputs as analog outputs, so a lot of the more strict concepts of typical digital video don’t really apply. That’s why I mentioned the logic chip series, since that’s the best way I could think to describe it without using a somewhat loaded phrase like digital video.

The EMS Spectre/Spectron was an inspiration for me when I made my first videosynth – using CMOS logic ICs. Castle is very much informed from that perspective.
The logic functions in the Spectre can be achieved with Castle, mostly. They differ in implementation. Theres no delay or edge processing (yet?). But you can do some edge type stuff with Castle with some clever patching, or using the Sandin IP Differentiator.
The oscillators on the Spectre are very interesting, and there’s nothing like it yet in LZX territory. You could nudge the oscillators up or down in scroll speed, horizontally or vertically! Pretty complex thing, using PLLs, counters, tracking filters.
The shape generators were also pretty interesting. You had a lot of shape options to choose from, something like that would be awesome in LZX as well. Clone, anyone?
For the oscillators Prismatic Ray is probably your closest bet, but with a lot more functionality and flexibility than the Spectre oscs – excluding the lovely scroll functions. But you’ll have a lot more CV control and more waveshapes.
For shape stuff, you can use Visual Cortex’s ramp section, which has a few different shapes, though not as many combinations as the Spectre.
OH, that reminds me about the ramp generator in the Spectre. There was a variable frequency Ramp, which is how you could get some stuff like Sierpinski triangles. I cloned the ramp section a while ago many years ago.

TL;DR
Castle has: counters, gates and inverters, flip flops, a video comparator of sorts in the ADC.
You can use Prismatic Ray for the oscillators.
Visual Cortex will give you shapes and mixing.

I think something close to the Spectre is possible, though not every function will be present, it’ll certainly be similar.

Orion - (presumably, since they’re not out yet) excellent feature-packed digital video modules (somewhat based on features found on classic digital video mixers, I think?)

Its worth that you check it out.

Re: Orion, both is correct.

With Expedition series we tried to thoroughly analyze analog image processors, audio synthesizers and classic video synthesizers on a circuit wise and functional level, expand on those ideas with our own, and put them within the context of a next generation video instrument.

With Orion series, the approach is the same, it’s just that we’re focusing on a different category of device (and implied era of the 80s and 90s). So that encompasses everything from early DVE units like the Ampex ADO, dedicated video computers like Quantel Paintbox or the Amiga Video Toaster, hybrid devices like the Fairlight CVI, and also just early computer graphics and computer game consoles/devices as well.

So Expedition is a shot at what analog video could have been if it had progressed from the 70’s and into the 80’s without a digital video revolution transforming the market.

And Expedition series is a shot at what digital video (with analog interfacing) could have been if it had progressed into the late 90’s without a software video revolution transforming the market.

In both cases, they’re conscious experiments in retro-futuristic possibilities.

Would it be possible there would be example setups with memory palace as well now? I am planning my rig around it and it would be fantastic to have a starting ground!

What would be the reason i would need TBC2 with the memory palace? Does it not do a similar job with inputs? (I am a novice so sorry if this is a silly question!)

Memory Palace only has LZX patchable video inputs, you cannot connect an external video source to MP directly. You would have to use Visual Cortex, TBC2, Cadet III or Vidiot to decode it first – each of these has different capabilities. In addition to supporting several input formats, TBC2 will let you bring two different sources into the system and share sync between them and other video synth modules – currently you need some out-of-rack time base corrector for this.

Starting to understand how clever this setup would be for a beginner like me. Thank you very much!

Happy to have found this thread. Learning so much from this forum, and excited to see the same types of starter system examples that include both the Memory Palace and Chromagnon!

So I’m planning to enter LZX world - well actually there is no going back now anymore cause I have ordered a bunch of modules already. I also had the honor of playing on my studiomates rack and got these results. It is more and less the aesthetic I would like to start to explore to start with. Until now I just used to jamm a bit with glichmodules and mix them with old videomixers and so on. I have a Audio Eurorack System, so LFOs and stuff is no problem and I even have modules I can directly set up for 1 v output.

This is from a session I was able to make on my buddys rack and it is certainly the direction I want to go.
first try

So now that we have GEN 3 modules coming I was wondering how sync is going to work? I’m planing on getting at some point a Chromagnon since I won’t need HDMI a Visual Cortex would be fine as well. But if I want to start with what I have - my current rack looks like that in a few days: 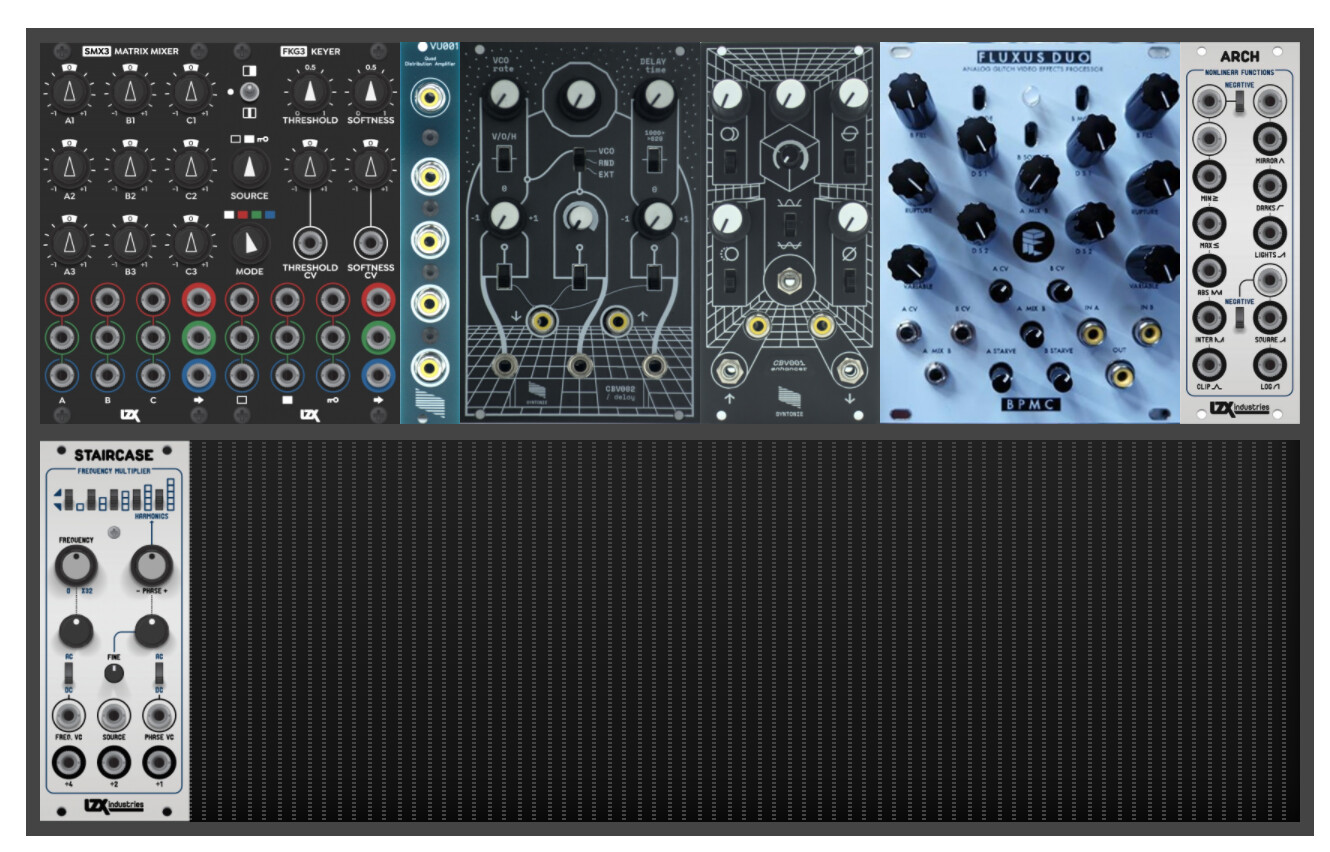 I was wondering how the compatibility works with what I have:
I tryied to research all this options but I feel like I don’t have all the possibilitys understood especially because of the 14 pins sync models that now as far as I understood is not requiered anymore?

So could I make now Videosynthesis with my rack if I use a Ramp Generator (I have acces to a 3 Trins RGB at the moment as well - I could use it’s ramps rights?) and a Cadet I Sync Generator? Or do I need now the ESG3? Since I’m in Europe I have understood that Bastien is also working on a solution the vu007 and I would like to support him but I will definetly expand my rack anyway with some of his vu modules.

I hope this is the right place to post this, cause I thought that we could update this now together with the current LZX GEN 3 modules and maybe mention also compatibilitys with older Generations?

Thanks everyone for this amazing knowledge in this forum I feel very excited to enter this project.

Chromagnon would be the most effective addition, as you’d get a sync source and animated pattern generation. If you just need sync and ramps, you could go with Cadet I & IV, but the Cadet sync gen is hard to find. ESG3 is another good solution; add DSG3 and ART3 to get some of the moving patterns shown in your linked video.

So in theory this could be a beginner building setup right now with the upcoming modules right?

I might be able to get some cadet modules for a while to test my system. But do I need a reverse and fill busboard?

Cadet modules use the normal Eurorack power bus. No need to acquire anything special for power. You will need to sync Cadet I, II & IV together using a 14-pin sync cable.

@Z0NK0UT Was wondering, is the feedback functionality of TBC2 similar to that which can be achieved with Chromagnon, or MemPal, or neither?