Another cross post from Facebook. This was a question i had been looking for a answer to recently.

Zach Michels - If I had a Navigator, could I spin shapes I am making in Cortex from Cortex ramps? Most of the videos I see with Navigator are doing exciting things, but I don’t feel like I’ve seen examples of this. I understand that with the release of Shapechanger this will be possible, right? Any one who has a Navigator wanna make an example video?
Cheers all.

Navigator includes the facility for mirroring, but its mirrors are placed BEFORE rotation, in the signal path – this is great for quadrilateral/bilateral mirroring when feeding Shapechanger, but does little if you want to create a rotated shape without the Navigator+Shapechanger combo.

Lars Larsen - To make myself doubly clear, (1) The Navigator+Shapechanger combo gives full 2D shape generation/rotation (in the spinning the shape clockwise/ccw sense.) (2) If you want to do this with Navigator alone, you need a way to (a) mirror your HV ramps post-Navigator, (b) mix/combine them in some way, © generate a key of that mix, such as with Doorway or Cortex. FYI, Staircase is five mirror circuits in series! So a pair of them could mirror H/V and then keep going…

Lars Larsen - In fact, Navigator+2xStaircase makes for a pretty interesting pattern/geometry voice in its own right. These kind of relationships are what the XY series modules are all about!

Lars Larsen - When imagining patches, it may also be helpful to think of Navigator as positioning/rotating a camera, rather than the shape itself.

Zach Michels - Ok… more like rotating the reference frame than the object kind of?

Lars Larsen - Yes! Because everything derived from the ramps which have been rotated will have their own geometries rotated identically. Say you have a Navigator with HV outs multed to 2x Shapechangers. One creates an ellipse, another a squiggle. When the Navigator rotates the ramps, both shapes will rotate, as if a camera pointed at them is spinning.

Lars Larsen - For me, a video synthesizer “voice” consists of 2 components: one for spatial parameters (position and rotation) and one for geometry (width/height, curve). Think of it like the VCF-to-VCA relationship in a monosynth. Usually the VCF is before the VCA, but you can also do it the other way around create different and interesting results. Navigator+Shapechanger present to you a holistic approach to the spatial+goemetry processor concept, but there are other ways to patch up the essential pieces of ramp processing based shape generation.

Would the H/V mirroring now be possible with Arch?

Yes it would! But you’d need two mirror functions (for H and V separately, before combining them.)

So my main reason for wanting Shapechanger is to spin a shape. What would be the signal path to use Arch and achieve this.

You’ve almost got it! Like that, but with Navigator between Ramps and arches. The patch above would give you double mirroring on the input to Navigator.

You can also use Staircase to do mirror function, but may have to tweak it a little to dial it in.

3 of the 4 functions in Arch are patched out utility block versions of some of the Shapechanger circuitry!

I tried by using Staircase for the second H mirror and was able to spin things!!! Still need to tweak some more but will share some notes over the weekend. I may need to head out and grab a second Arch.

I’m using doorway to try and scale but looks like I’m missing the ability to skew the ramps from what I’ve learned from watching videos of how Shapechnager behaves.

What I’m looking to do at its simplest is have a white diamond shape spinning 360” set against a black background.

Would this be possible without the scale and skew functions of Shapechanger?

what is the analog function of the mirror? just wondering what it does to the signals… if its just rectifiers or something else?

It is an absolute rectifier (very fast, with video opamps and high speed schottky diodes) but in a frequency doubling configuration. So the input signal as 0-1V is scaled to +/-1V so that it will slice right in the center. The rectifier then slices positive/negative portions and inverts the negative portion to give 0-1V on output, but at double frequency.

Yes you can get a white diamond rotating that way! You will want to run H/V ramps into Navigator, then essentially you are doing a sawtooth to triangle (frequency doubler) conversion on the outputs. You can use Arch to do that or Staircase (at low frequency settings, you want 2X). Basically you are converting the sawtooth ramps into triangle ramps AFTER the rotation. Then you mix them (a crossfader works well for this, and gives you something similar to the skew control) and then you key them (using Doorway or Cortex) to get the flat shape results.

Hello,
so if navigator doesn t spin a shape, wath exactly does it do ?.
thx

Navigator does spin the shape but from my understanding the mirrroring needs to take place after which is why I’m using Arch as a replacement for Shapechanger.

Navigator rotates the XY dimensions of the “scene” that the shape is created within. 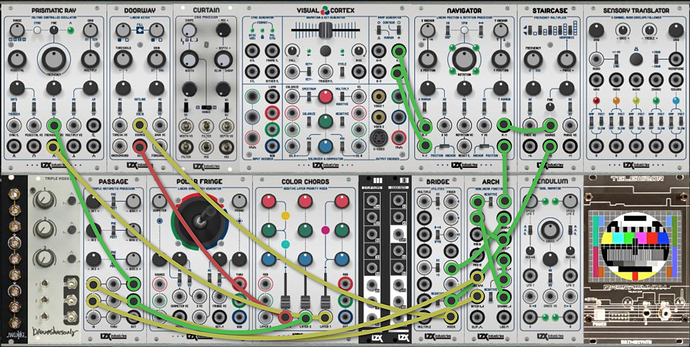 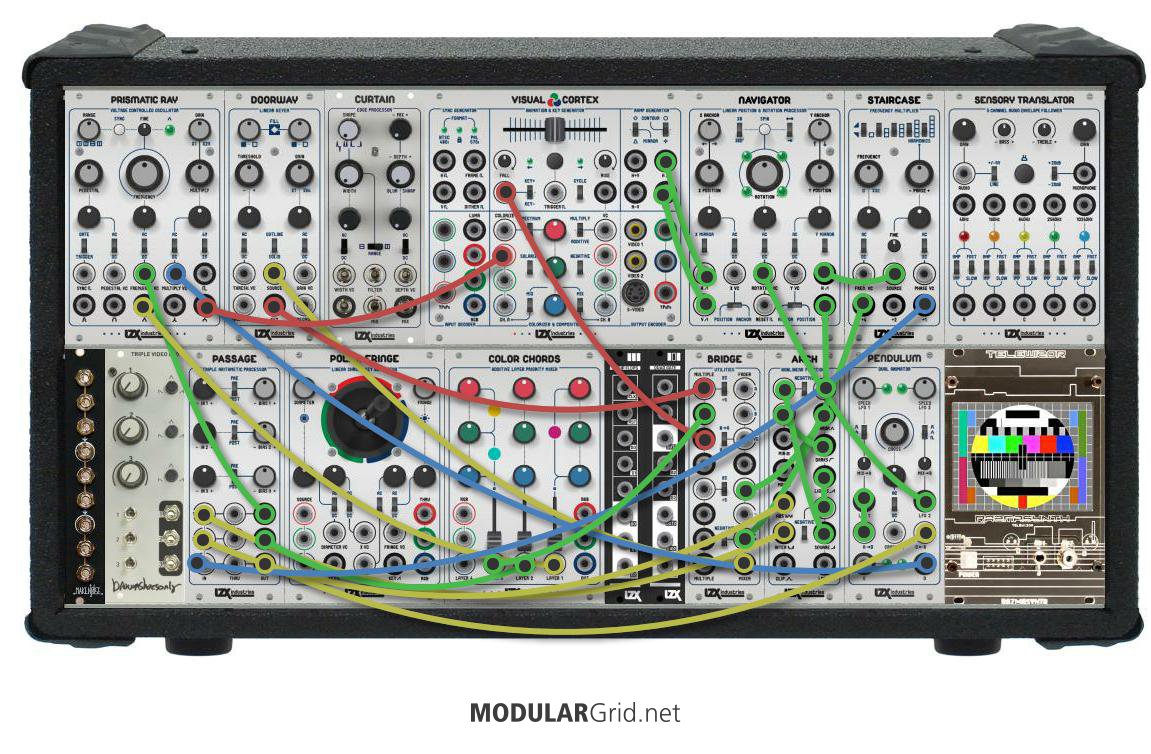 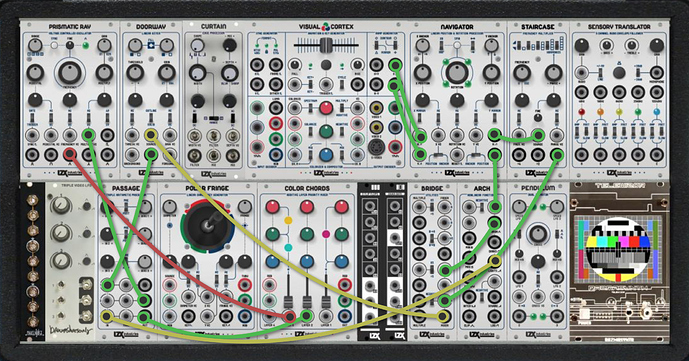